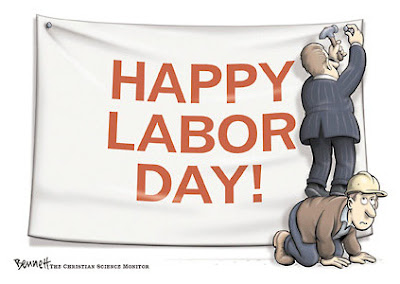 According to Wikipedia: Labor Day began in 1882, became a federal holiday by Act of Congress in 1894 and originated from a desire by the Central Labor Union to create a day off for the "working man".
.
According to my mother: Labor Day is when the white shoes go in the closet until Memorial Day. No exceptions.
.
According to me: Labor Day (this year) is the last day "off" before I head back from vacation to the wonderful world of another program year at All Saints Church in Pasadena. .
.
We've had a great three weeks of vacation which have -- uncharacteristically -- been just about totally unscheduled, disorganized and non-productive. We didn't go anywhere or accomplish anything, build anything, organize anything or convene anything -- other than reading some books, catching up on some movies, cleaning a few closets and actually reading the whole newspaper every morning rather than settling for the headlines on Google News.
.
We had some plans to do some "touristy" things here in L.A. that people who live here never take time to do ... the Observatory, Getty and Chinatown were on the list. And they're still ON the list as the WAY over 100 degree temperatures made hanging out with the animals in the A/C seem like the "better portion" one day after the other.
.
And I guess I'm not even all that sorry. It'll all still be there -- the Observatory and the Getty and Chinatown -- and I know I'm feeling more rested than I have in a good long while. And as I'm thinking the best souvenir I can bring back from vacation -- given the work I know we have ahead of us -- are the recharged batteries I've gotten from not running 24/7 for a couple of weeks.
.
Because I think the next unscheduled breath I draw may just be after next year's Lambeth Conference -- and that'll be a quick respite because the 103rd General Convention will be just around the corner and it WILL be just around the corner in Anaheim in 2009.
.
So here's my hymn du jour for this Labor Day. I love it because it calls us to action with hope and promise and the reminder that there is evil energy at work committed to "snatching the seed away" -- and our call to reap the harvest of the Good News of God in Christ Jesus proclaimed to absolutely everyone is the high calling that requires our best efforts, our hard work AND our recharged batteries to accomplish.
.

I also like it because, as my friend and mentor Liz pointed out to me MANY years ago, it's the only hymn in the hymnal that ends with a recipe: "Serve ants, well done." :)

.
So, enjoy your Labor Day. Give thanks for those who labor so we can live (especially today I give thanks for rescue workers, health care providers and those keeping the energy grid going in L.A. where it's meant to be 110 again!) and give thanks for rest so we can recharge our batteries to "labor on."
.
And let's claim as our mantra ... as we face the choices and challenges in this Episcopal Church in the days and weeks to come ... these words from "Ora Labora:"
.
"Away with gloomy doubts and faithless fear!"
.
Because the work is worth doing
AND because (with God's help) ... 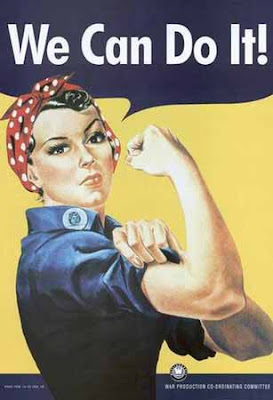 1. Come, labor on.
Who dares stand idle on the harvest plain,
while all around us waves the golden grain?
And to each servant does the Master say,
"Go work today."

2. Come, labor on.
The enemy is watching night and day,
to sow the tares, to snatch the seed away;
while we in sleep our duty have forgot,
he slumbered not.

3. Come, labor on.
Away with gloomy doubts and faithless fear!
No arm so weak but may do service here:
by feeblest agents may our God fulfill
his righteous will.

4. Come, labor on.
Claim the high calling angels cannot share
to young and old the Gospel gladness bear:
redeem the time; its hours too swiftly fly,
The night draws nigh.

5. Come, labor on.
No time for rest, till glows the western sky,
till the long shadows o'er our pathway lie,
and a glad sound comes with the setting sun,
"Servants, well done."
Posted by SUSAN RUSSELL at 8:41 AM

You mean you wear white shoes in CA? They always told us that NOBODY wears white shoes in CA. Glad you got some real rest. But leave Ora Labora off for me. To me that was always the hymn of the protestant work ethic which kills most of us.