+Rowan on the Record 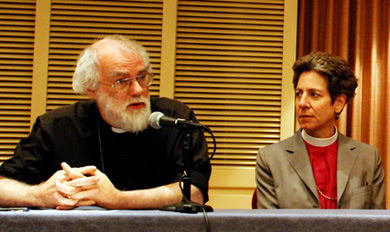 Verbatims from yesterday's press conference with the Archbishop of Canterbury include:

"I would hope that a gay or lesbian person who would want to be a Christian would want affirmation and challenge and would want to be challenged as to what is the way to live life as a follower of Christ. I hope we are clarifying the belief that is being and has been expressed in a number of conferences that violence against gay and lesbian people is inexcusable."

Finally, responding to a question about "healing" for homosexual persons, Williams replied, "That question presupposes that homosexual inclination is a disease. I do not assume that myself."

Washington Post: Anglican Leader Plays Down Schism
The Rev. Susan Russell, a California priest who heads Integrity, an advocacy group for gay, lesbian, bisexual and transgender Episcopalians ... said she was encouraged by Williams's comments at the news conference, where several conservative-leaning bishops also sounded conciliatory. "My take is there are some who are invested in pulling off this schism. And they have nothing to gain by us being in conversation," Russell said. Williams "just took the wind out of their sails."

Episcopal Life: Archbishop of Canterbury "encouraged"
After two days of "encouraging" talks with the Episcopal Church's House of Bishops, Archbishop of Canterbury Rowan Williams told reporters September 21 that if the Anglican Communion resolves its differences enough to avoid schism "it will have done something for the entire Christian community."

Walking With Integrity offers a Press Coverage Round Up and Titusonenine posted a Blog Round Up yesterday.