Live in Captivity: The Mormon Filmmaker & The Lesbian Priest 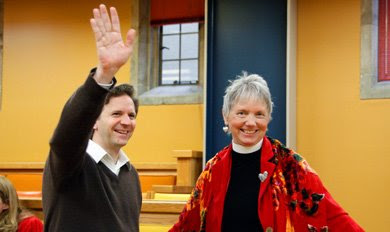 [photo: Jack LeVan]
There's an old saying about being "busier than a one-armed paper hanger" ... and that's kind of how it is around All Saints Church right now. So I do NOT have time to actually "blog" about how great it was to welcome Douglas Hunter to All Saints yesterday and how much fun we had screening his film, "The Contstant Process."

Happily, there's an ENS article that tells most of the story and the video of the Forum is up online, so I'm just going to post those for now and get back to work.

[Episcopal News Service] Filmmaker Douglas Hunter didn't set out to befriend or even to film the Rev. Susan Russell when researching same-sex marriage for a new documentary, he told an audience at All Saints Episcopal Church in Pasadena, California, on February 22. Rather, the 40-year-old father of three wanted to explore "the dynamic between religion and sexuality" and to engage those outside his own Mormon faith.

Read the rest of the ENS article here

Watch the All Saints Forum here
Posted by SUSAN RUSSELL at 6:11 PM

I watched the All Saints Forum late last night and meant to leave a note to say how really teriffic this is, Susan. Getting our stories out there can and will convert folks, one person at a time. Thanks for your vulnerability and your courage.