Fun Facts to Know and Tell ...

... about the California Supreme Court 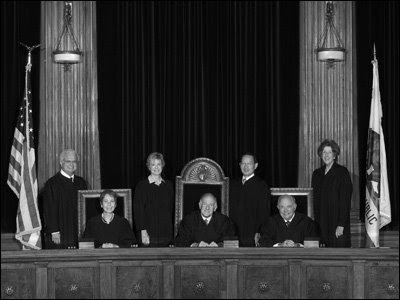 Here in California there is mounting anticipation of the soon-to-come California Supreme Court ruling on the legal challenges to Propostion 8.

In case you missed a meeting, the Court ruled in May 2008 "that people have a fundamental 'right to marry' the person of their choice and that gender restrictions violate the state Constitution's equal protection guarantee."

At the end of a well-funded fear-mongering campaign of disinformation, a bare majority (3%) of California voters passed Proposition 8 in November 2008 -- a ballot measure stating that "only a marriage between a man and a woman is valid or recognized in the State of California."

In March 2009, the Supreme Court heard oral arguments that Prop 8 was not an amendment but a revision of the constitution -- and the clock began ticking toward their ruling ... which was due within 90 days.

From the CA Supreme Court website: "Supreme Court opinions are normally filed at 10:00 a.m. on Mondays and Thursdays."

And since they give 24 hours notice .... and having had no notice today of a decision tomorrow (rumors to the contrary!) our attention now turns to keeping our eye on Friday to see if it might come Monday the 18th (another widely rumored "D Day") or -- failing that -- to gear up again next Wednesday for a possible May 21st date.

Whenever it comes ... and whatever it is ... we'll be ready to continue to stand for marriage equality.

I am following this closely on Gay married Californian my new blog, which provides links, commentary, and stories from the 18,000.

This post in particular discusses the issues around the Prop8 decision, and the likely response including links to the marches on the Day of Decision.

Did you see that Douglas Kmiec suggests that elimiinating ALL marriages (gay and straight) for civil unions is the answer? Which is remarkable because he's a very conservative Roman Catholic lawyer.