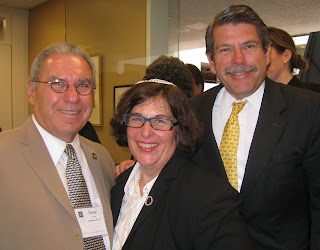 The Reform rabbi and lesbian denounced the ballot measure at news conferences. She pressed fellow rabbis to join the cause. She performed dozens of weddings for gay and lesbian couples -- sometimes five a day.

Given Eger's activism, one might expect her to champion the issue in her newest official capacity as the first female president of the Board of Rabbis of Southern California.

But Eger, who was installed Monday night at Temple Emanuel in Beverly Hills, said the board's 300 rabbis must tackle a broader agenda, one that deals with hunger, interfaith relations, professional growth for religious leaders and affordable housing in Los Angeles. The housing issue will be addressed during a forum at Eger's first board meeting Wednesday.

"It's not my goal to use my position as president of the board of rabbis to deal with a campaign issue," Eger, 49, said in an interview before her installation. "It's not my agenda."

But Eger and the board share common ground on the issue of marriage: Members voted overwhelmingly last September to oppose Proposition 8, partly a reflection of the group's composition: Reform and Conservative rabbis account for 85% of its members. Orthodox rabbis, who generally oppose same-sex marriage, make up 8%. The rest are Reconstructionist and nondenominational rabbis.

Eger said she expects to speak out -- as an individual or as rabbi of her West Hollywood synagogue, Congregation Kol Ami -- as the California Supreme Court prepares to rule on Proposition 8 in coming weeks and as possible political campaigns get underway over yet another ballot initiative in 2010.

The issue has personal ramifications. Eger not only presided over 60 same-sex weddings last year, she remarried her longtime partner, attorney Karen Siteman, 56, in an October ceremony at their Cheviot Hills home. (They were married by a rabbi in 1994.)

Eger and Siteman are among an estimated 18,000 gay and lesbian couples who married last year before Nov. 4, when Proposition 8 amended the state Constitution to outlaw the practice.

"I believe that injustice, when it is present, demands Rabbinic addressing," Eger said.

Eger has been a fixture of Los Angeles' Rabbinic community for two decades, serving as rabbi of Beth Chayim Chadashim, a gay and lesbian congregation, before founding the West Hollywood synagogue.

From the start, she saw activism as a key part of her work as a rabbi.

She chaired a spirituality advisory committee for AIDS Project Los Angeles and co-chaired the Gay and Lesbian Rabbinic Network. She also was founding president of the Lesbian, Gay & Bisexual Interfaith Clergy Assn. and campaigned against Proposition 22, the successful 2000 voter initiative that defined marriage as being only between a man and a woman.

Fellow rabbis say Eger is well known for her work in the larger Jewish world, not just for her activism on gay and lesbian issues.

"When you meet her, you don't meet a person who is a gay, female rabbi. You meet Rabbi Denise Eger," said Joshua Hoffman, a Conservative rabbi from Valley Beth Shalom in Encino who was installed Monday on the board's executive committee.

Posted by SUSAN RUSSELL at 8:31 AM

Please re-read the comment guidelines posted above and don't bother to post comments out of alignment with respectful discourse because they'll end up in the trash can where they belong. (And certainly your mother raised you better than to talk like that about other people, anyway!

As a Grafted-in-Gentile, and a student of the Old Testament, and as a Believer of the God of the Bible, I must admit, I'm incredulous when a Jewish Rabbi teaches that same sex-relations are desireable and allowable within the Life of the Synagogue. In addition -- Monday's NYTimes had a uncritical article about the figurine, 'Golem', a Jewish Monster that brings 'Good Luck & Protection' -- I mean really! Do the 'Reformed' Jewish people know anything about their own Religion?

Thanks for the information. we will pass it on to our readers and we have a blog that caters to blog readers in cheviot hills and Beverly hills. So well pass on out our senior club. Thanking you. cheviot hills homes for sale