In praise of reparative therapy! 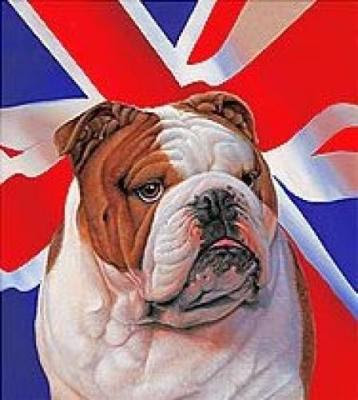 Yes, I've been healed. Healed AND converted. Because it turns out there IS a place for reparative therapy ... and now that I've experienced it, I am proud to say, "I BELIEVE!"

Let me be clear -- what I'm talking about isn't repairing things that aren't broken (like sexual orientation.)
I'm talking about the healing of deeply internalized attachments to things once-held-dear that lure one into a false sense of comfort and of civility, of order and of agreeableness -- all the while masking the intransigent evils of sexism, classism, homophobia and racism (to name a few.)
Yes, I've been healed -- of my Anglophilia.
According to one online dictionary: An Anglophile is a person who is fond of English Culture and England in general. In some cases, anglophilia represents an individual's preference for English culture over their own.
Guilty. Never missed "Masterpiece Theatre." Saved my pennies in college to take a trip to "the sceptered isle" in my junior year. Bought Royal Doulton china, adored Ralph Vaughan Williams, made my sons wear short pants to Sunday School and generally held the "Mother Church" that gave us the DNA of Anglicanism coursing in our Episcopal veins on a very high pedestal.
That was then. This is now.
It's been a journey, but I've been healed. A month in Canterbury in 2008 for the Lambeth Conference was the final straw. And then today I got a "booster shot" from this "don't miss" feature on Episcopal Cafe.

Read. Mark. Learn. Inwardly digest. HEAL!
I am not a nobody
By Lauren R. Stanley

When, pray tell, did I become a “nobody”? I want to know, so that I can readjust my thinking, readjust my life.
Over in the Church of England, a proposal is circulating that would limit the powers of some women bishops if anyone – apparently anyone – objects to that woman.
Rod Thomas, chairman of Reform, a conservative Anglican group in England, was quoted as saying this so-called compromise was “sensible.”
“It represents a compromise,” Mr. Thomas told Reuters. “It doesn’t go as far as some wanted, it goes further than some liberals wanted. It is a way in which nobody can lose.” (emphasis added)
“Nobody”? Is that what I am? A “nobody”?
It has taken the Church of England years, and lots of nasty infighting, to even consider the idea of women bishops. This after taking the same Church years even longer to decide to allow women to be ordained priests.
Just months after agreeing to open the episcopate to women, conservatives are forcing the Church to pull back. The Revision Committee already has voted to change the rules so that certain powers can be removed from women bishops simply to appease those who don’t want them. If women bishops face opposition from traditionalists in the dioceses in which they serve, some of their powers – as yet undetermined – would be taken away from them and given to male bishops.
One Church of England spokesman says that in parishes that “don’t recognize women bishops and want to look to another bishop,” – read “a man” – that diocesan bishop’s duties and responsibilities to those parishes would be reduced “automatically.”
So there would be no attempt at education, no attempt at mediation, no attempt at reconciliation. Apparently, just one person can object, and poof! There goes the diocesan bishop’s ability to function.
.
Liberals in the Church are decrying this latest development, claiming it would create a two-tier church, allowing discrimination against women to get even easier than it already is.
.
As a woman priest ordained for these past 12 years, I can assure you: The two-tier system that the liberals in England fear has existed for millennia. The Church has perpetuated this system throughout its history.
Why?
Because, apparently, it is still acceptable to declare women “nobodies.”
I find it ironic that this last brouhaha is taking place in England, which has been ruled, quite successfully, by queens and one woman Prime Minister. It’s OK for the nation to be liberal enough to recognize that women are equal, but heaven forfend if the Church were to do so!
Let me be clear: I am not a nobody. I am a beloved child of God, created in God’s image, brought into being because God loved me into being.
I have no desire to be a bishop, and certainly do not serve in the Church of England, so in theory, this latest development has nothing to do with me. But in fact, it does, because the women who are being called “nobodies” over there are my sisters in Christ. They, too, are beloved children of God, they, too, were created in God’s image because God loved them into being.
So my heart breaks to hear of this proposal, because it tells me that the Church of England is more concerned with appeasing those who cannot accept a new thing than it is with living into a basic tenet of our theology: That we are all created in the image of God.
Because that is true, none of us is a “nobody.”
.
Posted by SUSAN RUSSELL at 5:20 PM

Well there is always the dissenting tradition in England. Switch over to buying the Unitarian Wedgwood, Vaughan Williams was agnostic not CoE so you can keep his music, and Friend Margaret Fell was a early supporter of women speaking in the church

Susan, thanks for picking up on this. Indeed, it's time we are all healed from this discriminatory, anti-Gospel, so-called "leadership." Please, would it kill them to figure out what the "image of God" is?
-A grateful Lauren Stanley

You are one of my heroes, Lauren Stanley! Onward and upward!

How much more irrelevant can the CofE render itself? Thank God for the witness of the likes of Lauren Stanley and Susan Russell!
In the words of another valiant woman priest: "Onward into the realm of God"...that's REAL with an m (as in, what's REAL, what's important, like justice and equality)

Lauren Stanley is amazing. I wish I had a tenth her courage. I wish the failed archbishop of Canterbury had any percentage of courage at all.

I have never believed in re-incarnation but Archbishop Neville has about convinced me!

I'm hanging onto my Clatterford and Vicar of Dibley DVDs.