The "breaking news" that President Obama will sign the Matthew Shepard/James Byrd, Jr. Hate Crime Prevention Act this Wednesday, October 28th at 4:45 p.m. caused me to look through my files and find these words from our Clergy Call 2007 ... when we lobbied congress to move forward on Hate Crimes and Employment Discrimination: 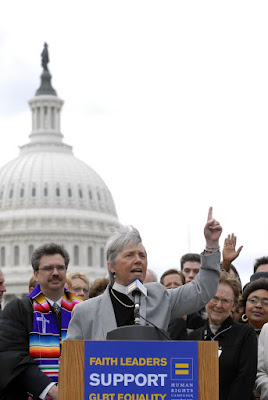 I am the Reverend Susan Russell, a priest on staff at All Saints Church in Pasadena, California. It is a privilege to stand here today in solidarity with other faith leaders and with a majority of Americans who believe the federal government should act to end workplace discrimination against gay, lesbian, bi-sexual and transgender workers. It is an honor to represent the Episcopal Church which stands as one of the over 210 law enforcement, civil rights, civic and religious organizations supporting the passage of the Local Law Enforcement Hate Crimes Prevention Act. And I thank you for this opportunity to witness to the core values I hold dearest as an Episcopal priest and as an American citizen.

My son Jamie is currently serving on active duty in Iraq. One of the core American values he was raised to embrace -- and he understands himself to be defending -- is our pledge to be a nation of "liberty and justice for all." I believe these important pieces of legislation will help move us AS a nation toward that long dreamed of goal – that dream of liberty and justice my son and so many other brave Americans in harm's way have sworn to preserve and protect.

We are not yet that nation when the liberty to walk safely on the streets of America protected from bias motivated violence is not yet available to ALL Americans: passing the Local Law Enforcement Hate Crimes Prevention Act will bring us one step closer to "liberty for all."

We are not yet that nation when in thirty-three states a hardworking American can be subject to the injustice of losing their job solely because of their sexual orientation or gender identity; passing the Employment Non-Discrimination Act will bring us another step closer to "justice for all."

One of the primary tenets of all religious faiths is to love your neighbor as yourself and as a Christian I follow a Lord who called us to minister unto the needs of "the least of these" as we live out our call to do justice and to love mercy in His Name. These are the Traditional Christian Values I claim as an advocate for these critical pieces of legislation today.

Viloence against the innocent is a CRIME, -- Defendants will be brought to trial and if found guilty will be punished to the full extent of the Law. It's wrong to double back and add additonal punishment based solely on 'perceived' thoughts of the perpetrators.

Congrats, America, the Land of the Free and the Home of the Brave, now has it's own 'Thought' Police Force.

Beware, Are you prepared to face --add on punishment based on your Thoughts as well?

Crimes commited against Women & Children , far outnumber 'hate crimes' against glbt group. How come these crimes aren't treated as Hate Crimes as well? After all, women are unfairly targeted because of their gender, and children are unfairly targeted because of their age. Don't you care about women & chldren? And don't forget Animal Cruelty, that should qualify as Hate Crime as well... with special punishments.

Gender was added in this bill ... along with sexual orientation, gender identity & disability. The law currently covers race, religion, and national origin.

And if you didn't read the Q&A on Hate Crimes post a few days ago:

... do take a minute or two acquire some actual facts about what the legislation does and doesn't do.

And then you might consider getting in touch with what it is that is such a trigger about protecting those who are vulnerable to violence just because of who they are.

The idea that violence against women and lgbt folks should be protected is really scary. Nothing in the law impacts arguing against 'gay marriage' or gender equity. It prohibits and penalizes violent acts based on a victim's real or perceived gender or sexual identity.

How does that threaten you LG? Planning to do some "gay bashing" or rape a lesbian any time soon? No? Then no worries mate!

Unfortunately, moral/ethical behavior cannot be legislated. Laws don't stop criminal behavior; if they did, our prisons wouldn't have an overcrowding problem.

It isn't "law" that in itself is right or wrong; it's the interpretation of it. There is no law in this land; only interpretations.

It is unfortunate that this is true, but it is true nonetheless. Time will tell how many different interpretations evolve.

LG, thanks for dropping by and favoring us with your wisdom, without letting the facts get in the way.