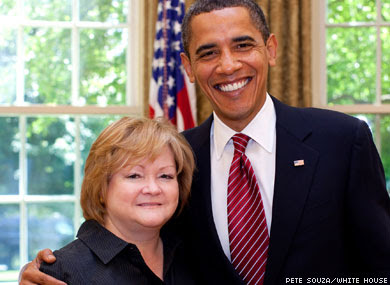 This afternoon, President Obama will sign the Matthew Shepard/James Byrd Hate Crime Prevention Act into law. Judy Shepard will be there to watch him sign. So will Wyoming Bishop Bruce Caldwell.

You can watch the signing live on the White House website ... or catch it delayed on CSPAN.com.
Either way, join those throughout the Episcopal Church (and beyond!) who will be marking this historic moment with a moment of prayer: in remembrance of those we've lost as victims of hate crimes and in thanksgiving for this landmark legislation.
Information on the Call to Prayer is on Walking With Integrity -- including this "Collect of the Day:"
Loving God,
We pray for victims of hate crimes;
for those who have been targets of violence
just because of who they are;
for their families and all who grieve for them.

We give thanks for all those who have
labored, lobbied and prayed
for inclusive federal hate crimes legislation
and for the Hate Crime Prevention Act
signed into law today.

Bless us, we pray, with the knowledge
that we are secure in your love;
that we can make a difference;
that you call us always to seek and serve Christ in all persons
and to respect the dignity of every human being.
And may the peace the world cannot give
reign in our hearts always.
Amen.

Finally, take a look at what it took to get us to this day (from the HRC website: Love Conquers Hate)

More than 1 million emails/faxes and phone calls sent to Capitol Hill since 2002 in support of hate crimes legislation;

More than 300 organizations (civil rights, religious, law enforcement, etc) who signed on in support of the Matthew Shepard Act;

86,582 total hate crimes reported since the introduction of the first hate crimes bill on November 13, 1997. Of that reported number, 13,528 of those hate crimes have been based on sexual orientation.

14 floor votes in the House and the Senate over twelve years to finally get the bill to the President's desk;

At least 26 states whose Attorneys General have supported the hate crimes bill since its' introduction;

1 President who was an early supporter of hate crimes legislation; 1 who did all he could to stop a hate crimes law for the LGBT community and 1 who signed it into law.
===
UPDATE: Here's a YouTube capture of the signing: