The Rev. Christine M. Nevarrez, deacon at Church of the Transfiguration, Arcadia, died on September 25 of cancer. She was 64.

Christine was a valiant Integrity ally and was one of the deacons at the Integrity Eucharist in Anhaeim. (pictured below) Many of you will remember her joyful procession of the gospel book during that wonderful celebration. 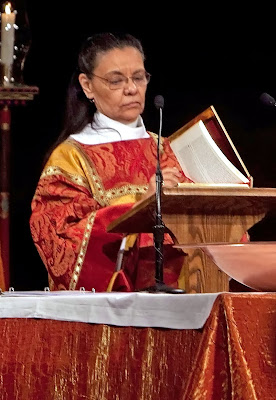 Survivors include her brother, Richard (Martha) Nevarrez and their children and a stepdaughter and her family. Her husband predeceased her.

Requiem Eucharist and interment will be held at Church of the Transfiguration, 1881 South First Ave, Arcadia, on Saturday, October 24 at 10 a.m. Clergy: white stoles.

Nevarrez was raised up for diaconal ministry from the Church of the Transfiguration and served there after her ordination while continuing to work as a legal secretary and administrator. She was especially interested in pastoral visitation and was a leader of Transfiguration's English as a Second Language classes and Bible study for the growing Chinese-speaking community in Arcadia.

She periodically served as a deacon for diocesan services at the ProCathedral of St. John in Los Angeles and worked with Bishop Suffragan Chester Talton on a discernment committee for deacons. She was also a volunteer supervisor in the House of Deputies at General Convention in Anaheim last July.

Nevarrez, who was born on June 24, 1945, received her theological training at the Episcopal Theological School at Claremont (Bloy House) and was one of ten deacons ordained during Diocesan Convention in 2006.

I'm literally "walking out the door" to attend Christine's memorial service this morning, but wanted to invite prayers from the wider community in thankgiving for her life and witness.

May she rest in peace and rise in glory.
.
Posted by SUSAN RUSSELL at 9:12 AM

Prayers for all who loved her. Her presence at the Eucharist was so joyful - the memory remains.

May she rest in peace and rise in glory.

She must have been fighting her health battle at the time of the convention, whether diagnosed at that time or not. What bravery and devotion to celebrate with us and shepherd us at convention! God rest her soul and comfort her loved ones. Amen.

Thank you for coming today.

The link below shows pictures of Chris' ministry at Transfiguration.