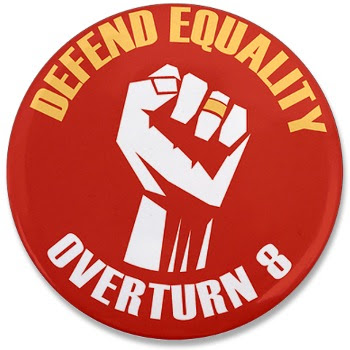 As reported by the L.A. Times:

A federal judge refused today to dismiss a constitutional challenge to Proposition 8, ruling the voter-approved ban on same-sex marriage raised legal and factual issues that required a trial.

Walker previously ordered the Proposition 8 campaign to disclose its internal memorandums and communications to gay rights lawyers. The campaign is appealing that order to the U.S. 9th Circuit Court of Appeals on 1st Amendment grounds.
====
And this from NBC:
What the judge said in court could be seen as even a bigger potential win for gay rights advocates than his ruling.
The San Francisco-based judge said he wants proof that allowing gay couples to wed threatens traditional male-female unions
Posted by SUSAN RUSSELL at 5:27 PM

Has Obama come out in a clear statement about his actual views on same-sex marriage? I understand he has had a change of heart, but wondering how he has made this known to general public?

I was also wondering how he came to such a radical reversal in opinion. ?

I would have married my wife, Beeper aka Sharon, regardless of whether Lisa, Case Manager at my law office, can marry Susan, her partner, or whether Christopher, my Associate Attorney can mary his partner Andreas.

I am not sure I would call his change of heart "a radical reversal in opinion." President Obama has always supported civil unions and equal rights. Same-sex marriage is not that big of a leap from his previous ideas.

My, LGM, you ARE snarky.

The radical reversal was from Obama's explicit support for SSM in the 90s to his rejection of it in 2008.

He does not support DOMA, however.

Not that I'm aware of. He still says he's opposed to gay marriage; favors domestic partnerships, and is opposed to Constitutional amendments (Federal and State) because they're discriminatory.

Perhaps the president is able to separate his own views from imposing them on those who do not share them?

Especially when there is no skin off his nose either way.

My marriage has no malign effect on anyone else's. Quite the contrary in fact.

Susan+,
You're a baseball fan. So, this ruling out of the federal court to allow the challenge to go forward is a win. And there are still 159 more "games" to go. I'm savoring this victory for y'all in California; now let's win some more!
Love that judge asked the question about the "threat" to straight marriages.