So we're on vacation in Colorado enjoying blue skies, cool breezes and the great company of friends and family. And a cabin with wifi. So over my (late) morning coffee I decided to log onto Facebook and send some birthday greeting to some friends and ... 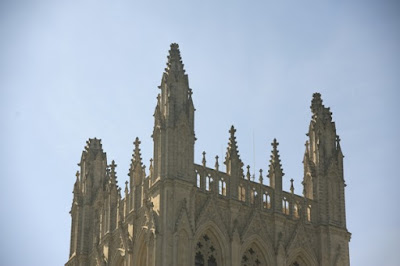 The highest point of in the nation’s capital, the “Gloria in Excelsis” central tower of Washington National Cathedral, sustained significant damage in the 5.8-magnitude earthquake that struck Tuesday afternoon. Mason Foreman Joe Alonso is currently assessing the damage to the Cathedral building with the help of other Cathedral stonemasons and structural engineers.

Three of four pinnacles (corner spires) on the central tower have been damaged. Specifically, three “finials” (capstones shaped like fleurs-de-lys) have fallen from them, with more significant damage to two of the pinnacles. Similar decorative elements on the Cathedral's exterior also appear to be damaged. Cracks have appeared in the flying buttresses around the apse at the Cathedral's east end, the first portion of the building to be constructed, but the buttresses supporting the central tower seem to be sound.

No individuals were injured either within the Cathedral or on its grounds. Despite some cracks on upper floors in the interior, no damage to the stained-glass windows has been reported. The building has been closed to visitors until further notice.

UPDATE: A video look at the damage to the Cathedral.

Posted by SUSAN RUSSELL at 2:46 PM

I hear you had one in Colorado too