Down the Rabbit Hole with Michelle Bachmann 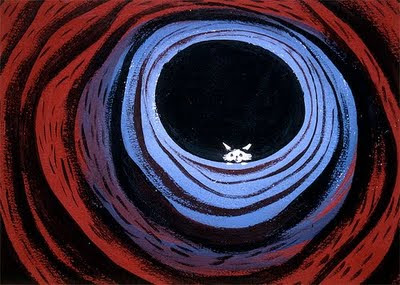 I've been sucked down the rabbit hole of reading Michelle Bachmann quotes. Actual quotes of things she really said. Out loud. For example:

"There are hundreds and hundreds of scientists, many of them holding Nobel Prizes, who believe in intelligent design." -Rep. Michele Bachmann, Oct. 2006

“Unfortunately [Melissa Ethridge] is now suffering from breast cancer, so keep her in your prayers. This may be an opportunity for her now to be open to some spiritual things, now that she is suffering with that physical disease. She is a lesbian.” -Michelle Bachmann, November 2004.

"If we took away the minimum wage -- if conceivably it was gone -- we could potentially virtually wipe out unemployment completely because we would be able to offer jobs at whatever level." -Michele Bachmann, Jan. 2005

And from this "Fact Check" feature on the Huffington Post:

Michele Bachmann's claim that she has "never gotten a penny" from a family farm that's been subsidized by the government is at odds with her financial disclosure statements. They show tens of thousands in personal income from the operation.

Bachmann's wildly off-base assertion last month that a NATO airstrike might have killed as many as 30,000 Libyan civilians, her misrepresentations of the health care law, misfires on other aspects of President Barack Obama's record and historical inaccuracies have saddled her with a reputation for uttering populist jibes that don't hold up.

Examining 24 of her statements, Politifact.com, the Pulitzer Prize-winning fact-checking service of the St. Petersburg (Fla.) Times, found just one to be fully true and 17 to be false (seven of them "pants on fire" false). No other Republican candidate whose statements have been vigorously vetted matched that record of inaccuracy.

Here are just a few:

BACHMANN: "Well what I want them to know is, just like John Wayne was from Waterloo, Iowa, that's the kind of spirit that I have, too." – Speaking to Fox News on Sunday.

Wayne was born in Winterset, Iowa, nearly three hours away, and moved to California in his childhood. John Wayne Gacy, convicted of killing 33 men and boys, was born in Chicago, moved to Waterloo to work in his father-in-law's chicken restaurants and first ran afoul of the law there, sentenced to 10 years for sodomy. He began his killing spree after his release, and his return to Illinois.

BACHMANN: "Overnight we are hearing that potentially 10 to 30,000 people could have been killed in the strike." – Criticizing Obama in May for the "foolish" U.S. intervention in Libya, and citing what she said were reports of a civilian death toll from a NATO strike as high as 30,000.

THE FACTS: The U.S. ambassador to Libya, Gene Cretz, said in late April that U.S. officials have seen reports that 10,000 to 30,000 people may have died in Moammar Gadhafi's crackdown on protesters and the fighting between rebels and pro-government forces, but it is hard to know if that is true. He was speaking about all casualties of the conflict; no one has attributed such a death toll to NATO bombing alone, much less to a single strike.

THE FACTS: Obama did not empty all the oil from the strategic reserve, as Bachmann said. He approved the release of 30 million barrels, about 4 percent of the 727 million barrels stored in salt caverns along the Texas and Louisiana coasts. It's true that the U.S. normally taps the reserve for more dire emergencies than exist today, and that exposes Obama to criticism that he acted for political gain. But the reserve has never been fuller; it held 707 million barrels when last tapped, after 2008 hurricanes.

BACHMANN: "One. That's the number of new drilling permits under the Obama administration since they came into office." – Comment to a conservative conference in Iowa in March.

It seems that having Sole Possession of the Capital T Truth gives you license to not bother with Capital F Facts. Just because I don't believe in capital punishment doesn't mean I don't hope she gets enough rope to hang herself.