DOMA Closer to the Dumpster

Let's be clear: the so-called "Defense of Marriage Act" does not defend marriage -- it discriminates against same-sex marriages. Equal protection simply isn't equal protection unless it equally protects everybody -- and since DOMA violates that foundational principle of constitutional democracy it is long past time for it to go in the dustbin of history. Today's ruling by the 1st Circuit Court finding DOMA unconstitutional is therefore an important step toward that goal – making "liberty and justice for all" a little closer to really mean "all." 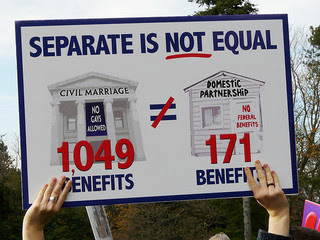 BOSTON — An appeals court ruled Thursday that the heart of a law that denies a host of federal benefits to gay married couples is unconstitutional.

The 1st U.S. Circuit Court of Appeals in Boston said the Defense of Marriage Act, which defines marriage as a union between a man and a woman, discriminates against married same-sex couples by denying them federal benefits.

The law was passed in 1996 at a time when it appeared Hawaii would legalize gay marriage. Since then, many states have instituted their own bans on gay marriage, while eight states have approved it, led by Massachusetts in 2004.

Read the rest here
Posted by SUSAN RUSSELL at 8:00 AM