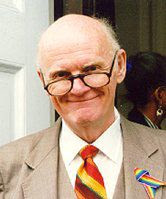 From Louie's latest: "A Way Forward and A Huge Missed Opportunity"
The intended audience of the Joint Standing Committees report is the Anglican Consultative Council to whom they report. If their dense prose makes it possible for the Anglican Communion to move beyond the current debilitating sexuality debate, the Committee will have performed a major service to the world's second largest Christian body. News genuinely good may again be spoken.
But the Joint Standing Committee and the Episcopal House of Bishops missed a major opportunity. Over 100 journalists were registered at the meeting in New Orleans, and thousands more were following it from afar. There is not enough money in the advertising budgets of all 38 provinces in the Communion to buy the time of that the press gave freely to cover this occasion, and yet those two august groups spoke no clear and welcoming word to the world, whose attention they so rarely command.
How refreshing it would have been had the Committees reported: We conclude that God still is no respecter of persons, that God loves absolutely everybody. All are welcome in the Anglican Communion!
It remains the job of every Christian not only to proclaim that good news, but also to live it. In Christ there is no gay or straight, bond or free, male or female. In Christ we are all one. Our assignment is to love the world, not condemn it, even as God, for Christ's sake, loves us.
.
Posted by SUSAN RUSSELL at 1:22 PM

How refreshing it would have been if ALL of the members of the Joint Standing Committee had been consulted before the forced publication of the report. Mouneer was left out entirely and was surprised when he found that the report was done by the Committee -- of which he is a member.

More illegitimate machinations by 815. History will record the filth and such will be associated with the progressive agendas.

Whatever. Mouneer was "surprised" when he missed the deadline for offering his input for the collective report that he was too "busy" to get to? Not too busy to get his oar in the water with a rebuttal before the ink was even dry on the report of the majority of the committee which managed to get their homework in on time.

Spare me the 815 conspiracy theories. The schismatics got outmaneuvered by those trying to hold the Communion together.

Outmaneuvered, or lied to again?

Anonymous-
He was with the ABC at the time, as I am given to understand. He had an opportunity to respond and have input. He knew when the deadline was.
Either he is incompetent, genuinely confused or lying.
I imagine that the Archbishop was under the assumption that he committee would wait on him, due to his august personage. The little temper tantrum when he was proven wrong was unbecoming, but typical of Donatists from the first stirrings of the heresy in the fourth century till now. The next thing we will see is a denunciation of the Committee its self, if not the entire listening process.

According to the unofficial play book, Mouneer and other foreign folks are automatically entitled to some extra grace. You must be fine with a report written from a white Western authorship.

BTW
When bloggers here get asked hard questions (or annonying ones) there is a resort to jibes: 'ol buddy, get over it, whatever, incompetent, spare me, and other dismissive tones. You'll note that I never jibe but ask annonying questions. So much for the "radical welcome", huh.
Just noticing.

And I was right!
The Living Church sallies forth to try and salvage the situation.

BTW- Doug, where did the "extra grace" idea come from?