It was a beautiful day in the Berkeley neighborhood ...

... yesterday where we met at CDSP with some of our Anglican kin from across the pond for conversations about the upcoming family reunion slated for Great-Uncle Rowan's place this summer. 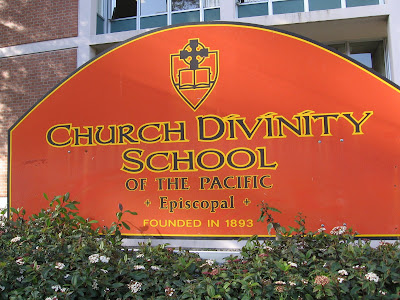 Making the long, journey from London and sacrifically putting up with the California version of February weather (75 degrees with blue, sunny skies!) were Inclusive Church allies Philip Chester and Giles Goddard -- pictured here with Integrity Board member Caro Hall (Director of Anglican Communion Affairs) and my own over-dressed self.
. 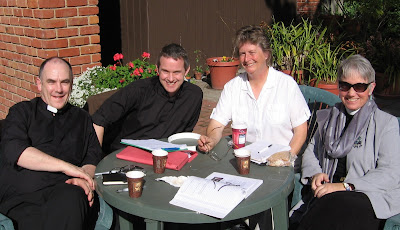 [photo credit: Tom Jackson]
We had quite the delightful visit, after the chance to worship together at noon Eucharist in the CDSP chapel and a lunch "conversation-with" members of the seminary community. It was marked with hope and optimism in a time of very genuine concern for the "what nexts" of being a Church ... being a Communion together.

It also pointed out, once again, the very real differences between our CofE cousins and ourselves as American Anglicans and ... as we named it in our afternoon conversation ... if WE are family members separated by a common language, how much more do we have to work to bridge the gaps with our Anglican counsins-further-removed by language, custom and culture in order to be part of this global Anglican family!

I wrote about that a few months ago in a piece called "Mind the Gap:"

For there are very REAL differences between us and our Anglican siblings, cousins and cousins-once-removed – and those differences did not start with the election of the Bishop of New Hampshire in 2003! To “mind the gap” is not to ignore those differences but to refuse to allow them to be exploited into the divisions they do not have to be.

George Bernard Shaw’s famous description of “two countries separated by a common language” is also a very apt description for the gap I found myself called to “mind” while I was in England – the gap between my experience in the American Episcopal Church and the experience of those who live and move and have their being in the Church of England. And if Americans and Brits have a gap to mind no wonder the Communion is facing challenges to its unity when we’re trying to bring Newark and Nigeria together under the same tent!

That's the work we'll be about together at Lambeth Conference ... with Giles and Philip and our other Communion Cousins: "minding the gap" as we build relationships across the pond AND across the divide.

There are miles to go before we rest, but if yesterday was any indication, we are off to a VERY good start!
.

Posted by SUSAN RUSSELL at 8:19 AM

Aren't you glad I arranged this stunning weather for you, instead of the usual SF February rain!!! = )

My personal view is that the very reason we notice differences between the U.S. and the U.K. is that we are so very SIMILAR. In other words, if you went to visit a culture that was truly foreign, the differences would be so profound as to not really merit mention.

Maybe it's just my own English heritage (although removed by four centuries) but when I'm in Britain I often feel at home in away that I don't in Spain or Germany.

Whatever the case, keep up the good work!

My dream is of the day you can have that meeting in our neighborhood at Trinity Seminary. Of course, you probably would not have that lovely weather but you and we would be experiencing something resembling a miracle.