A Martini for Miss Lydia!

Miss Lydia turned 104 on January 17th and the party is still going on! Pictured below with my son, Brian when he was home for Thanksgiving weekend...
. 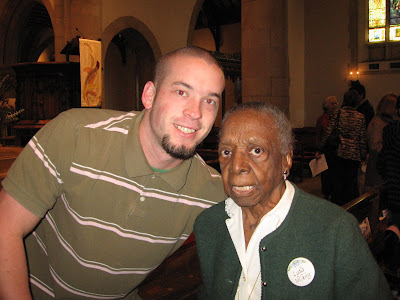 .
... Lydia was the subject of a feature article in today's Pasadena Star News (also posted below.) And tomorrow, at All Saints Church, we will premiere an anthem of the 104th Psalm, written in her honor by composer in residence Bill Cunliffe.

So here's to Miss Lydia
Long may she thrive!
(And I happen to know
She is ALREADY planning
Party One Hundred and Five!)

PASADENA - When Lydia Wilkins was born Jan. 17, 1904, women didn't have the vote and voting was difficult or impossible for most black men. Now, at 104, Wilkins is getting ready to cast her ballot for a woman or a black man for president of the United States in the November elections. "I didn't think I'd live that long - I think it's wonderful," she said of candidates Hillary Clinton and Barack Obama. "But I think I'll vote for Obama. Yes, why not?"

As Black History Month begins this month, Wilkins is a living link to a century of hard-fought change in race relations. "I have lived in some terrible times," she said, sitting in the tidy bungalow she and her late husband, the Rev. William Alfred Wilkins, retired to more than 30 years ago. "People were still black and white. It made a difference."

Growing up in East Orange, N.J., Wilkins said she was spared much of the overt racism experienced by blacks in the South and elsewhere. She graduated from a racially mixed high school. "New Jersey didn't have strict segregation," she said. "No one at school was allowed to call names, and most of the children did a lot to fight segregation. The boys played football, and they played so well they were always on the team."

Her mother and grandmother were strict, and neighbors were always on the watch for misbehavior, she recalled. "My parents were right on their toes," she said, smiling. "The least thing that happened at school and they were right there. We didn't have all this killing when I was growing up."

But she still remembers dropping out of Temple University in Philadelphia because of swimming class. "That's why I didn't finish college," she said. "They encouraged the girls to get out of the pool if I got in. It was terrible. Boys aren't as bad as girls, are they? When they did that, I wouldn't go back and that's what they wanted."

But she did meet her husband at Temple. The couple came to Pasadena in 1933, when her husband became vicar of St. Barnabas Episcopal Church on North Fair Oaks Avenue. They and their two daughters stayed until 1942, when he became a World War II Army chaplain, and they retired here after he had headed churches in Texas and North Carolina.

In 1982, the couple celebrated their golden wedding anniversary at All Saints Episcopal Church, where Wilkins still attends services every Sunday and goes for lunch across the street at McCormick and Schmick. "It's one of the highlights of her Sundays," said Barbara Jackson, who has helped "Miss Lydia" since July - and is the beneficiary of her advice on etiquette, table-settings, grammar and the proper way to clean silver.

Wilkins is still "sharp as a tack," said her daughter, Marjorie Jones, 74, who lives in Vallejo and visits often. "Nothing gets by her." Her mother was always politically active, Jones said, and her father was "very much involved in the NAACP."

"Dinnertime conversation was always political, and she didn't go a day without reading the paper and having something to discuss," Jones said. "She always goes to vote, and she won't do an absentee - she has to go there."

Until she was about 101, Wilkins drove herself to the polls. "When she turned 100, she went out and purchased a brand new car," said Andre Vaughn, her next-door neighbor. "She gave it up when she was involved in an accident. She wasn't at fault; someone ran a red light." Vaughn recalled a police officer coming to his door. "He asked, `Is she really 100?' and when I said yes, he was flabbergasted."

Wilkins doesn't dwell on the past, Vaughn said. "She's always in the here and now. Once in a while she'll reminisce, tell some funny thing, something bad she did as a little girl," he said. She spends her day watching television - "Dr. Phil, he's my favorite," she said - and being out and about, regularly getting her nails and hair done.

Her secret to a long life, she says, is that she's never had a cola drink. "My grandmother said it wasn't good for me." Jones said her mother has a few other secrets for longevity, too.

"She still likes her martini," Jones said, laughing. "What's interesting to me is for breakfast she likes half a grapefruit, all the sections cut out, sprinkled with sugar - and then rum."

Posted by SUSAN RUSSELL at 1:36 PM

Half a grapefruit with sugar and rum for breakfast -- wow.

A marvellous lady. May God richly bless her.

Lydia is a treasure. I am blessed to know her.