"This just in" via email -- the Inclusive Church Newsletter report from Philip Chester and Giles Goddard in the United States:

We're just over half way through our visit to the US: we write this on a plane from Chicago to San Francisco. So far it's been an excellent trip. We may have the record for the world's most extended Holy Communion; we went to the Ash Wednesday liturgy in the morning in the monastery of the Cowley Fathers in Cambridge Massachusetts. We had to leave at the Peace to catch a plane to Chicago. We walked into the church of the Atonement that evening just as they were beginning the Eucharistic prayer so we were able to complete our communion. We're mercifully far away from all the talk about Sharia law and the Archbishop, and for once it's a relief to be able to focus on the Anglican Communion!

Meetings have been held with a wide range of people, from lay people in Rhode Island to the Canon to the Presiding Bishop, and from key people in Integrity and the Chicago Consultation to clergy in Manhattan. 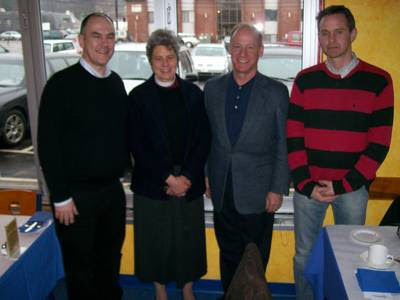 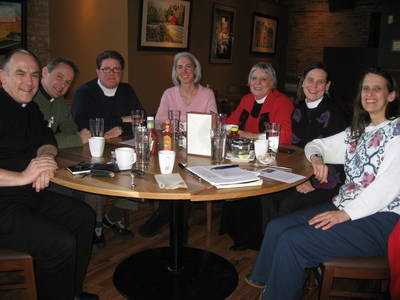 
We've explained that we came to the USA mainly to listen to the experience of the Episcopal Church and to develop an understanding of its situation, and to help develop communication between it and the Church of England. It's quite clear that there is a huge gulf of understanding between our churches; and yet, although there are many differences, the similarities are very profound. Anything we can do, as the Lambeth Conference approaches, to improve the relationship has to be a good thing.
Contrary to popular perception the Episcopal Church is in good heart, and maintaining a significant position in the USA as a church which is both broad and welcoming; which covers a wide churchmanship with big differences of opinion and yet is determined to stay together. Given the sort of coverage the secessionist dioceses and parishes get in the UK, it's a remarkable thing to learn that out of around 7,200 congregations across the country less than 100 have sought to leave. And out of around 110 domestic Dioceses, only 2 are likely to seek to secede. We're talking very small numbers, less than 2%. Many of the other parishes which might previously have wanted to leave are now recognising that to be part of a greater whole is valid and important, and real efforts are being made to develop understanding between those of different positions.

It's true to say however that there is widespread anger because of the way that the Episcopal Church has been perceived to be treated by the Primates and by senior members of the hierarchy in the UK and around the world. The position of welcoming lesbian and gay people is not some arbitrary piece of rights-based legalism; rather, it's worked out from the profound desire that "the Episcopal Church welcomes you" and is rooted in an understanding of the Gospel and Baptism which seeks to turn no one away.

In that context, the way in which more conservative and often rejectionist clergy and bishops are perceived to have been given the lion's share of attention and support is seen as both unjustified and unfair. Particularly in the light of the fact that there are many services of affirmation of same-sex relationships happening in the Dioceses of London and Southwark yet no one says a word about that.

But the commitment to the Communion remains. Lambeth 2008 is being prepared for carefully, in the hope that it can genuinely provide a meeting of minds and a deeper understanding of the Anglican Communion. And the people we have spoken to are too polite to remind us that without the USA the Communion could not, under any circumstances, survive financially - but their continued support is strong testimony to the way in which the shared history and practice of the Gospel in the Anglican tradition is valued.

Of course the Anglican Communion is about far, far more than the UK and the US. But our churches have a great deal in common. And gracious conversation between us would undoubtedly provide a stronger base to build on for the rest of the Communion, especially those many parts which are feeling disenfranchised by the loud voices of their conservative brothers and sisters. The Global Center, for example. And the province of Australia.

We have some ideas; a joint conference in Boston or NY between the Episcopal Church and the Church of England would be a good place to start. Common affirmation by parishes around the word of the value of Communion. Above all we're learning that it's better to talk than to assume, and better to share worship than to get our opinions from the internet. To the entente cordiale, and to Lambeth 2008!

Posted by SUSAN RUSSELL at 8:13 AM

I see the picture of +Wolf. I'm curious, one minute she's walking with the Windsor Bishops and now she's meeting with members of a GLBT organization. Has she had a change of heart or really trying to engage in the listening process?

Also, I do believe both Fort Worth and Pittsburgh will leave TEC so that will be 3 diocese that leave TEC. The good thing is, as many as 25 churches are now pledging to remain in TEC and I think a few more will also make that decision.