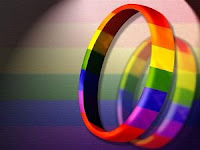 CONCORD, N.H.—The House has voted to make New Hampshire the third state allowing gays to marry two years after they granted them the right to enter into civil unions.

The House voted 186-179 to send the bill to the Senate. The first attempt to pass the bill fell one vote short, but opponents were unable to kill it. The House then reconsidered and passed the measure.

Two years ago, the Legislature approved civil unions for gays, but some proponents of joining Connecticut and Massachusetts in allowing marriage said the time isn't right in New Hampshire
Posted by SUSAN RUSSELL at 11:02 AM

This is so embarrassing that we, in Vermont, have a governor who is playing the Republican sanctity-of-marriage card so he can get re-elected next year (or does he have his eyes on a larger prize?) and our neighbour, NH, who used to be much more conservative is racing ahead of us. But people here re-elect Douglas because they think he 'cares' about them simply because he shows up at ribbon-cutting ceremonies around the state.

Nowhere near enough votes to override the promised veto.