Just in from EDS via press release, this VERY good news of the unanimous election of Dr. Katherine Ragsdale as the next dean of EDS -- good news not only for EDS but for the whole church AND for LGBT folks wondering if it's possible to be out and exercise vocation in the Episcopal Church!

Katherine is a long-time friend (at my age we quit saying "old friend" :) and was an important part of our Lambeth Witness team as well as a longtime General Convention activist. Way to go, EDS -- and Congratulations, Dr. Ragsdale!
. 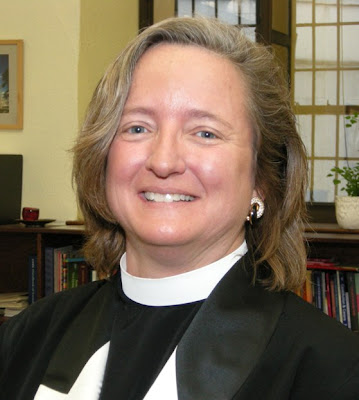 Mr. Brett Donham, chair of the Episcopal Divinity School Board of Trustees announced today that The Rev. Dr. Katherine Hancock Ragsdale, president and executive director of Political Research Associates and vicar of St. David’s Episcopal Church has been named the new president and dean of Episcopal Divinity School. Elected by a unanimous vote of the board of trustees, Ragsdale succeeds The Right Rev. Steven Charleston who led the seminary from 1999 to 2008.

“The Search Committee presented to the Board of Trustees The Reverend Katherine Ragsdale as its unanimous recommendation for president and dean of Episcopal Divinity School,” said Donham. “Katherine’s gifts, skills, and experience are an excellent match with the criteria established by the Search Committee, both in terms of the current challenges and opportunities at EDS, and the personal attributes we are looking for in a new leader.”

EDS trustee and search committee member, The Right Reverend Thomas Ely continued, “The Search Committee sees in Katherine the right combination of a person of immense faith, demonstrated organizational and team leadership ability, a passion for academic excellence and quality theological education, formidable development skills, and the ability to be a strong, articulate, and inspiring voice for the mission of EDS, both within the Episcopal Church and beyond. From among the many gifted candidates we interviewed, Katherine Ragsdale overwhelmingly stands out as the one best equipped and called to lead EDS into this next exciting and promising chapter of our life and mission.”

Ragsdale, a 1997 graduate of EDS, comes to the School from Political Research Associates, a progressive think tank, where she has served as president and executive director since 2005. Her leadership and development skills helped PRA successfully make the challenging transition from a founder led organization to one that continues to grow and thrive following the founder’s retirement. During her tenure, PRA has both broadened its donor base and worked with foundations to launch several new programs. Ragsdale has served on the boards of The White House Project, NARAL Pro-Choice America, and the Religious Coalition for Reproductive Choice among others. She has served as vicar of St. David’s Church in Pepperell, Massachusetts since 1996.

When asked why she chose to leave PRA at this time, Ragsdale said, “EDS’ commitment to the full range of diversity and not merely to inclusion but to transformation is at the heart of my own values and commitments. I believe that EDS grounds that work in the context of deep, thorough, nuanced theological education. The thought of leading and supporting an organization doing cutting edge theology and preparing lay and ordained leadership to serve God in the church and the world is very exciting.”

EDS trustee, The Rt. Rev. M. Thomas Shaw said, “I am thrilled with the appointment of Katharine Ragsdale as the president and dean of EDS. She brings a wealth of small parish ministry to her new position and it is critical that the new president and dean be able to train and form parish priests for the growth of progressive parishes across the country. She brings a wealth of experience, talent and creativity to this new position.”

Ragsdale holds a doctor of ministry degree from Episcopal Divinity School, a master of divinity degree from Virginia Theological Seminary, and a bachelor of arts degree from William and Mary. Her publications include “Not by Outrage Alone,” Dispatches from the Religious Left (Ig Publishing, 2008), “The Christian Right’s Staying Power,” with Chip Berlet, The Progressive (July 2008), Boundary Wars: Intimacy and Distance in Healing Relationships (Pilgrim Press, 1996), “The Role of Religious Institutions in Responding to the Domestic Violence Crisis,” Albany Law Review (1995), and Building Advocacy Skills (Leader Resources, 1994).

"I am elated to have the Rev. Dr. Katherine Hancock Ragsdale join EDS as its first woman President and Dean,” commented search committee member and EDS Acting Academic Dean, Dr. Angela Bauer-Levesque. “As someone with stature in the church and in the world, she inspires excellence. Her commitments, energy, and clarity, combined with her astute analysis, her collaborative style, and her experience in fundraising will make EDS more boldly live out its purpose of educating lay and ordained leaders for the church and the world, dedicated to work for justice, foster diversity, and seek constructive change."

Episcopal Divinity School is a respected center of study and spiritual formation for lay and ordained leaders with a strong commitment to justice, compassion, and reconciliation. EDS, formed in 1974 with the merger of Philadelphia Divinity School (founded in 1857) and the Episcopal Theological School (founded in 1867), offers doctor of ministry and master’s degrees, as well as certificates in theological studies. Located on an eight-acre campus just a few blocks from Harvard Yard, EDS is a member of the Boston Theological Institute, a consortium of nine eminent theological schools, seminaries, and departments of religion.

Thanks be to God!

AS a cradle Episcopalian I firmly disagree with all that has thranspired within the ECUSA. The new dean of EDS has some very incongruent ideas about abortion. She states that abortion is both a blessing and a maricle. Spoken like a true socialist!! I fail to see how the act of destroying a human life no matter the manner in which it was concieved can be called a miracle and a blessing. I would invite Dean Ragsdale to explain herself. With some 2 million couples (heterosexual) waiting to adopt in this nation, my late wife and I being one (and my current wife and I considering) abortion is a selfish thing by the mother. It is not a blessing or a maricle, it is an Obamanation. In her seermon recently she stated that this was the God she knew. Her god must have horns, because my God, the God of Abraham, Issac, and Jacob would never subscribe to this.
I do have two questions for the dean. Does she support the death penalty for condemned prisoners?
and At what point in the womans body does LIFE itself begin?
I can be reached at themjmillers@hotmail.com. I dont really think she will respond because people with ideas like hers tend to hide behind a lot of psychobabble.
Sincerely,
Joseph H. Miller III
Cordova, Tn. 38016

Amen! I couldn't have said it better.