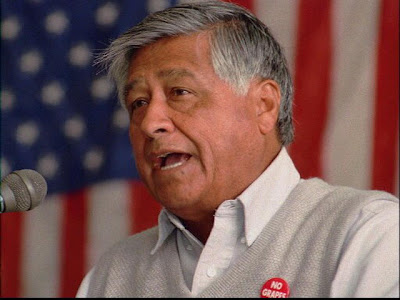 Today is holiday here in California ... Cesar Chavez Day ... and so I thought I'd share this reflection on his life and work by my All Saints colleague Lori Kizzia from this week's "Saints Alive" newsletter:
.
======
.
The story of Cesar Chavez resonates with greatness, humility, courage, and faith. An heroic American, born in Arizona in 1927, his life was the personification of the American Dream. Cesar Chavez overcame injustice and poverty to accomplish his ultimate success: the spending of one’s life and self in the pursuit of justice and in service to others.

Cesar Chavez and Dolores Huerta formed the United Farm Workers Union in California in 1962. Their organizing effort grew out of the desire to bring basic human dignities to workers in the fields. Cesar himself, became a migrant farm worker instead of going to high school so that he could help to support his family, and spare his mother from working the fields. Their work to organize workers in the fields of California grew into a national movement for worker justice. The UFW continues to organize for workers’ rights and has become iconic in the labor justice movement in the United States.

Chavez left the world a better place, meeting violence with non-violence, facing inequality with empowerment, transforming oppression into dignity. A role model to millions, including workers, heads of state, peace activists, and politicians, Cesar Chavez is a national hero. Several years ago a handful of organizers in Los Angeles began a movement calling for a federal holiday to honor and celebrate Cesar Chavez and his legacy. The State of California was first in the nation to adopt a State holiday on March 31. Arizona, Colorado, New Mexico, Texas and a handful more, have also adopted March 31 as official state holidays to honor Cesar Chavez.

A coalition across the country is working to advance March 31 into a national federal holiday to bring the life and work of Cesar Chavez fully into the nation’s consciousness. Click here to sign a petition to add your voice to that coalition and make "Cesar Chavez Day" a national holiday.

Thanks for alerting us to this. In 1968 or so, I was working with the Black Panther Party in the Lettuce Boycott.
Si se podemos!