ADVENT Week One: Hope Will Never Be Silent 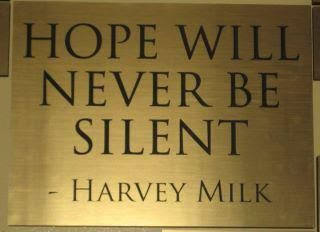 And I'm struck this afternoon by the connection between that First Sunday of Advent prayer and the fact that this year the first Sunday of the new church year falls on the 33rd Anniversary of the Assassination of Harvey Milk. From an online tribute:

On this date in 1978 (33 years ago), Mayor George Moscone and councilman Harvey Milk -- one of the most prominent national leaders in the legal protection for gay and lesbian citizens -- were murdered in city hall in San Francisco. The murderer's defense was dubbed "Twinkie Defense:" he'd eaten too much junk food and that's why he planned and carried out the murders. The jury bought the defense, And 33 years later, we have not yet reached the goal of equal protection under the Constitution for all Americans.

And yet, Hope Will Never Be Silent.

Whether that candle of Hope is on an Advent Wreath in an Episcopal Church in Pasadena or in the hand of the icon of a martyr in the gay liberation movement it is the same light shining out in the darkness of all that keeps us from being the human family we were created to be.

It is the light of respect for the dignity of every human being in our baptismal covenant and the light of liberty and justice for all in our pledge of allegiance.

It is the light of love that casts out fear; of Isaiah's proclamation of the Year of the Lord's Favor to the oppressed and captive and of Mary's Song exalting the humble and filling the hungry with good things.

It is the light of hope that burns with those standing in solidarity with the Occupy Movement and its challenge to corporate greed and compromised capitalism and with those claiming the legacy of Harvey Milk as they work for Family Values that value all families and a Protect Marriage Movement that protects ALL marriages.

"The first candle of Advent is the candle of Hope." Happy New Year, Church!
Posted by SUSAN RUSSELL at 1:08 PM

Holy Harvey, pray for us...

Saw the 1984 doc "The Times of Harvey Milk" last night. Still wondering how sneaking a loaded gun and extra ammo into city hall, through a window, bypassing the metal detector, is not evidence of pre-meditation. Maybe the fact that the jury contained zero LG persons, and zero minorities, had something to do with it.