Quote of the Day: "Equality is never a special interest."

Nevertheless, I woke up, booted up my laptop and managed to watch most of the hearing (thank you CSPAN!) ... where my pick for best quote of the day came from Senator Chris Coons of Delaware: 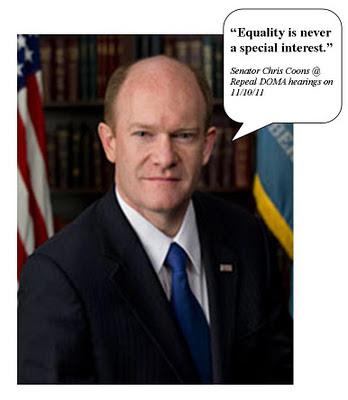 Close seconds were Al Franken (Minnesota) taking exception with a statement by Chuck Grassley (Iowa) stating that marriage had "always" been defined as between one man and one woman."

And Patrick Leahy (Judiciary Committee Chair) responding the argument that this was not the "right time" to bring the issue to the Senate:

"It is never the wrong time to right an injustice."

Finally there was this encouraging quote from Senator Dick Durbin (Illinois):

“I voted for DOMA. I believe that I was wrong. Upholding marriage equality is the right thing to do now. I don’t care if it wins me votes or loses me votes … . I don’t want to be on the wrong side of history on this issue.”

The vote was 10-8, with all committee Democrats favoring appeal and all Republicans opposed. The repeal bill would need 60 votes in the 100-member Senate, and sponsors acknowledged the votes aren't there. The measure would have no chance in the House, controlled by conservative Republicans.

So why bring it up now? Because it's never the wrong time to do the right thing. And because every touchdown starts with a kickoff and we had that today in the Senate Judiciary Committee's willingess to mark-up the bill and get the ball moving.

So it was a good day for liberty and justice for all -- even if it did start a little early for a west coast wonk. And I'm proud of the statement issued by my rector and parish ...

Respect for Marriage Act: Statement from All Saints Church, Pasadena

It is long past time to overturn the so-called Defense of Marriage Act (DOMA) – a shameful piece of legislated discrimination that does nothing to defend marriage and everything to make second class citizens out of gay and lesbian couples and their families. And so at All Saints Church in Pasadena we greet with delight the news that this morning the Senate Judiciary Committee approved the Respect for Marriage Act. By that action our nation takes a much needed step toward making liberty and justice for all not just a pledge but a reality.

“God does not discriminate against same-sex couples and neither should our federal government,” said All Saints’ Rector Ed Bacon. “The time has come for a Protect Marriage Movement that protects ALL marriages and for a Family Values coalition that values ALL families – and as a priest and pastor I want to be part of helping realize that goal.”

At All Saints Church in Pasadena we married forty-six same-sex couples when marriage equality was the law in California from May – November 2008. When a slim majority of California voters passed Proposition 8 and wrote discrimination into our state constitution, our governing board passed the following resolution:

WHEREAS, the institution of civil marriage in the State of California is, as a result of Proposition 8 and the Court’s decision, a constitutionally-mandated instrument of discrimination, which furthers injustice and denies same-sex couples the fundamental dignities to which each human being is entitled;and

WHEREAS, our active participation in the discriminatory system of civil marriage is inconsistent with Jesus’ call to strive for justice and peace among all people and respect the dignity of every human being; and

WHEREAS, All Saints Church is called to make the sacrament of marriage equally available to all couples, regardless of their sexual orientation;

NOW THEREFORE BE IT RESOLVED that the Rector, Wardens and Vestry do declare that the sacramental right of marriage is available to all couples, but that the clergy of All Saints Church will not sign civil marriage certificates so long as the right to marry is denied to same-sex couples.

The Respect for Marriage Act will allow All Saints Church to get back into the business of ministering equally to all who come to us seeking to live lives committed to each other and in alignment with God’s love, justice and compassion. And by granting the same federally protected rights and responsibilities to all married couples it will help us live into our DNA as a nation conceived in liberty and dedicated to the proposition that all are created equal.