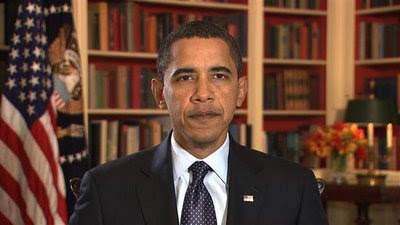 Yesterday in President Obama's three minute Thanksgiving address he wished the American people a Happy Thanksgiving -- and gave special thanks to the brave men and women serving overseas and those giving back to their communities during the holidays.

"We're especially grateful for the Americans who defend our country overseas," Obama said in his Thanksgiving Day address. "To all the service members eating Thanksgiving dinner far from your families, the American people are thinking of you today."

He gave thanks for pilgrims, pioneers and patriots. He talked about the many blessings we share as Americans. And he thanked those who were stepping up to help neighbors in need ... in shelters and soup kitchens ... modeling a sense of mutual responsiblity that (in his words) shows that we "are our brother's keeper ... we are our sister's keeper."

So what's not to like about that? How much more "traditional Thanksgiving Values" can you get than thanking the troops and feeding the needy? (Wait for it ...)

And if he didn't "say it" (the argument goes) how are we supposed to know who he's thanking? Examples include:

And then there was Fox News columnist Todd Starnes who complained that the president's "remarks were void of any religious references although Thanksgiving is a holiday traditionally steeped in giving thanks and praise to God."

(Seriously -- this is all it takes these days to get Crabby Conservative Christian panties in a wad?)

Matthew 7:21: Not every one that saith unto me, Lord, Lord, shall enter into the kingdom of heaven; but he that doeth the will of my Father which is in heaven.

And if that doesn't do it, then take two Micah 6:8s and a Matthew 25:40 ... and DON'T call me in the morning. Go feed somebody who's hungry or donate some clothes to the shelter or visit a shut-in.

Because THAT'S what Jesus would do. Seriously.

Conservatives are criticizing President Obama for not mentioning God in his weekly Internet address, which was about Thanksgiving. The President did, however, mention God in his Thanksgiving Proclamation. Sadly, for Republicans, neither of the top two GOP front runners mentioned God in their Thanksgiving statements. Oops.

I'm sorry, I just can't be bothered to give a damn what the wingnuts say...

We understand that Obama doesn't really give credit to God... for anything. True to his Humanist beliefs, he gives Man credit. But, it's hard to wrap our head around it ... an American President that omits God on the very Christian Holiday, 'Thanksgiving Day' [see President Washingtons words & President Lincolns words. ]... so we Crabby Christians bring it up.

It's the irony of it all that gets to us... Obama the 'Intellect', just can't seem to use his formidable powers of reason ... in tracing all Blessings back to God. (you don't have to go very far.)

Re the God Issue, he's a Lightweight, and it shows. We Crabby Christians don't think he could fight his way out of a wet paper bag... He's a facile 'Leader'. [an oxymoron if there ever was one.]

And, as if to prove JCF absolutely right . . . ladies and gentlemen, LGMARSHALL!!!!

The President doesn't mention God, but tries to do His work - the right-wing "christians" say "God" in every other breath, and do His opponent's work.

Meanwhile Newt Gingrich and Herman Cain jockey to "protect the sanctity of marriage" from gay couples ... I mean, really -- you can't make this stuff up!

From the link cited by Susan - “Three of the Republican presidential candidates – Mitt Romney, Newt Gingrich and Rick Santorum – issued Thanksgiving statements that omitted any references to God.”

Are they also Kenyan humanists with no birth certificates, LG? Or did you just feel like making an ad hominem attack today?

Just a few decades after the generosity of the Wampanoag people toward the Plymouth colony in the 1620s, re-enacted in elementary schools across the US every November, King Philip's War (1675-1676) resulted in the deaths of 40% of the tribe. Most of the male survivors were sold into slavery in the West Indies. Many women and children were enslaved in New England. My family, Seventh Day Baptist Christians, fought in this war and bought some of the Wampanoag as slaves in Rhode Island.