The defense has rested. Let the "spin" begin 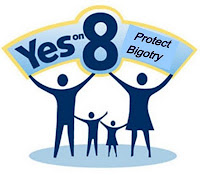 The defense rested today in the Perry v Schwarzenegger Prop 8 Trial in San Francisco federal court. Judge Walker announced he'd be taking 30 days to "digest" the two weeks of testimony and set February 26th as the date he'll be ready to decide on a closing argument schedule.

So here's a foretaste of the NOT-so-heavenly banquet of Prop8 Trial post-mortem by the "Protect (our-but-not-your) Marriage" folks. I spied it yesterday on General Counsel Andy Pugno's blog which began:

"Once again, religion was on trial this morning ..."

No. In point of fact, what was on trial in Federal Court over these last two weeks was the abuse of religion as a weapon of mass disinformation in the 2008 Proposition 8 Campaign.

What was on trial was the use of money, resources and influence to fuel animus based bigotry by those hiding behind "freedom of religion" while attempting to inflict their view of religion on the rest of us.

What was on trial was a campaign to take rights away from gay and lesbian families based on the belief that since God does not equally bless the "lifestyle" of same sex couples then the Constitution should not equally protect them.

What was on trial was a homophobic attack on the foundational values of our constitutional democracy.

And while the defense may have rested today, in point of fact there IS no defense for allowing bigotry to trump the constitutionally protected rights of all Americans. None.

So let the "spin" begin. But remember at the end of the day it is the truth that will set us free.

And what the truth can set us free to do is to stop fighting and fundraising and politicizing and demonizing in order to keep some Californians from being married and focus instead on supporting ALL Californians as we work to build stronger marriages. Stronger families. A stronger California and a stronger America.

For the truth is that families are not undermined by gay marriage. Families are undermined by poverty, joblessness, lack of health care, racism, discrimination, failing education systems and the deteriorating infrastructure of a state that should be pouring all its energy into supporting families -- not discriminating against gay and lesbian families.

Posted by SUSAN RUSSELL at 4:35 PM

Obviously, I hope our side persuaded Judge Walker to agree with our position that marriage is a fundamental right which cannot be denied to couples on the basis of their gender or sexual orientation - cannot be denied even by a majority of the electorate. But I'm going to be just the least little bit skeptical and say I'm not sure the evidence we presented regarding the Prop 8 election was all that helpful. Basically, unless the Judge (and ultimately, the Supreme Court) agrees that this is a 14th-amendment protected right which is "off the table", then all we have is a political campaign which we lost. I'm not sure a judge or five Supreme Court justices are going to intervene in that instance.

The issue is whether it is ever lawful and just for a majority to vote on the rights of a minority. Even their own witness said that is a problem with the initiative process. If anyone had put inter-racial marriage, women's rights, or school desegregation up for a vote, they wouldn't have passed.

My blog, Gay married Californian, discusses these and associated issues at length.

IT, I'm definitely pro-gay marriage, I just am not completely sure that we carried the day, strong as our arguments were. If I had to guess now, I'd guess Judge Walker is going to rule in our favor. He's conservative, but with a strong libertarian stripe. But I'm not sure the Supreme Court wouldn't find it easier just to punt and disregard the main issue on the grounds that the only complaint here is that filed by the losing side in an election. Bush v. Gore notwithstanding, I can see 5 justices holding that they're not in the business of getting involved in elections.