Playing "the victim card" in the Prop 8 trial

Tracking the Prop 8 Trial on Trial Tracker today, the Yes on 8 folks had their victim cards out on the table this morning.

Because, you see, the real victims here are not the gay and lesbian families who are denied equal access to the equal protection of 1138 federal rights that marriage grants their separate-but-unequally-advantaged heterosexual next-door neighbors.

Nope. The real victims here -- according to the arguments being made in Federal Court in San Francisco -- are the Yes on 8 supporters who were unfairly targeted for vandalism and harassment for their position on marriage equality.
So I say, let's see their "victim cards" and raise 'em ... and here's a start: The No on 8 sign vandalized in front of St. John's Episcopal Cathedral in Los Angeles: 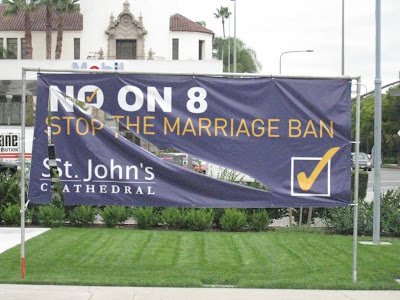 And then let's get back to arguing this case on its merits: Does or does not equal protection extend equally to all Americans?
Posted by SUSAN RUSSELL at 11:50 AM

The violence we endured...mean words, petty vandalism, is nothing compared to them.

Our dead are nothing compared to their....hurt feelings.

They have the audacity to compare themselves to the freedom riders in the Civil Rights era, and us to the KKK.

In this topsy turvy world, we are not worthy of respect and equality. And I will bet you, after the dust settles and when this ends upat SCOTUS, the gang of five who today decided that Government is for sale to the highest corporate bidder, will sell the GLBT as well.