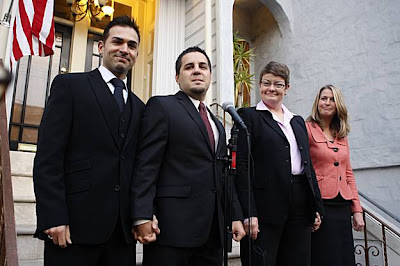 Well, we’re done for today, which is kind of sad. I remember the first time I really heard anyone use the phrase “teachable moment.” Arianna Huffington said it as only she can. And it stuck with me. But then, as with so many other popular culture phrases, it became hackneyed. If someone punched a kid in the eye, it was a “teachable moment.”

Today has truly provided teaching of the first order. When do we get to see four people—two couples—relate very personal stories about marriage and love and being gay? When do we get to hear those people talk about how the Prop. 8 ads hurt them personally? When do we see the affect that stigmatizing homosexuals for millennia has had on Jeff or Sandy? And when do we get to learn from a Yale and Harvard professor that our current understanding of the form of marriage is relatively new, not biblically based and the building block of the American polity?

I just finished up a talk with a reporter who had a bad divorce. His girlfriend wants to get married; he does not. After watching today’s trial, he said he understands why she wants to marry. Too bad the right wing does not use the trial to teach the value of marriage. That’s how we strengthen not just the institution of marriage, but American civilization.

Thanks Chad Griffin and Bruce Cohen for having the vision and balls to put this together. And thanks donors who had the courage of their wallets. Thanks to the plaintiffs for putting yourselves out there, for being vulnerable. But most of all, thanks to David Boies and Ted Olson. Let us not ever underestimate the source of much of the ethos that pervades this trial. It is from Ted Olson, a lifelong Republican, George Bush II’s Solicitor General. I have known Ted for twenty five years through business dealings in the distant past. I have rarely agreed with him, but I have always respected him. And I guarantee you that the nine justices and the entire right-wing/libertarian establishments are watching Ted’s leadership on this issue.