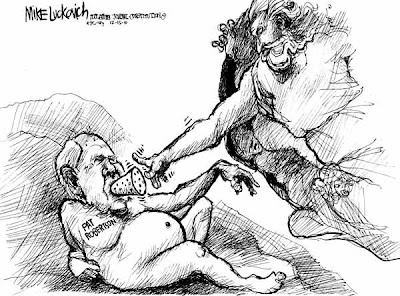 [thanks to ann fontaine for this one!]
Posted by SUSAN RUSSELL at 2:46 PM

You got that right. What an embarrassment.

The apparent lack of compassion in the highlighted snipet aside for the moment. Perhaps it is Christian generosity to allow for his own response to the criticism?

VIRGINIA BEACH, Va., January 13, 2010 -- On today’s The 700 Club, during a segment about the devastation, suffering and humanitarian effort that is needed in Haiti, Dr. Robertson also spoke about Haiti’s history. His comments were based on the widely-discussed 1791 slave rebellion led by Boukman Dutty at Bois Caiman, where the slaves allegedly made a famous pact with the devil in exchange for victory over the French. This history, combined with the horrible state of the country, has led countless scholars and religious figures over the centuries to believe the country is cursed. Dr. Robertson never stated that the earthquake was God’s wrath. If you watch the entire video segment, Dr. Robertson’s compassion for the people of Haiti is clear. He called for prayer for them. His humanitarian arm has been working to help thousands of people in Haiti over the last year, and they are currently launching a major relief and recovery effort to help the victims of this disaster. They have sent a shipment of millions of dollars worth of medications that is now in Haiti, and their disaster team leaders are expected to arrive tomorrow and begin operations to ease the suffering.

The issue isn't compassion for Haiti. (Rush Limbaugh is the one who flunked that one big time.)

It's about perpetuating the absurdity of blaming a nation's socio-economic challenges on being "cursed" -- which utterly avoids examining how and where we as a nation of privilege have participated in policies that have exacerbated those challenges.

And CBN can "spin" all they want ... Robertson clearly infers that the earthquake happened because of this imaginary "curse" (this from the guy who blamed 9-11 on the ACLU and "homosexuals") ... and as a Christian I'm horrified that this kind of ridiculous rhetoric drives anybody with half a brain away from even considering Christianity thinking we're all a bunch of whackos like Robertson.

It's up to us to speak out and say Robertson does NOT speak for us!