So here's the Letter from Lambeth ...

... causing all the fuss. Just got home from New York and our meetings with Canon Phil Groves from the Anglican Communion Office to an email inbox full of stuff about this letter "leaked" by Ruth Gledhill .

I'm not sure how you "leak" a form letter to going out in bushels to anyone who writes protesting +Gene's exclusion from the Lambeth Invite List but there it is ... and here is what is getting the Stand Firmites all in a swivet. 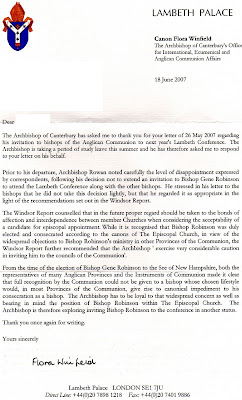 The text is hard to read in the scan above so here it is:

'The Archbishop of Canterbury has asked me to thank you for your letter of XXXX 2007 regarding his invitation to bishops of the Anglican Communion to next year’s Lambeth Conference. The Archbishop is taking a period of study leave this summer and he has therefore asked me to respond to your letter on his behalf.

Prior to his departure, Archbishop Rowan noted carefully the level of disappointment expressed by correspondents, following his decision not to extend an invitation to Bishop Gene Robinson to attend the Lambeth Conference along with the other bishops. He stressed in his letter to the bishops that he did not take this decision lightly, but that he regarded it as appropriate in the light of the recommendations set out in the Windsor Report.

The Windsor Report counselled that in the future proper regard should be taken to the bounds of affection and interdependence between member Churches when considering the acceptability of a candidate for Episcopal appointment. While is it recognised that Bishop Robinson was duly elected and consecrated according to the canons of The Episcopal Church in view of the widespread objections to Bishop Robinson’s ministry in other Provinces of the Communion, the Windsor Report further recommend that the Archbishop ‘ exercise very considerable caution in inviting him to the councils of the Communion.

From the time of the election of Bishop Gene Robinson to See of New Hampshire, both the representatives of many Anglican Provinces and the Instruments of Communion made it clear that full recognition by the Communion could not be given to a bishop whose chosen lifestyle would, in most Provinces of the Communion, give rise to canonical impediment to his consecration as a bishop. The Archbishop has to be loyal to that widespread concern as well as bearing in mind the position of Bishop Robinson within The Episcopal Church. The Archbishop is therefore exploring inviting Bishop Robinson to the conference in another status.

Thank you once again for writing.'

So while some are (incorrectly) reporting that +Gene "has been invited to Lambeth" basically all +Rowan has said is he's still thinking about it.

I seem to remember that Jesus himself only got angry when his discples excluded the "unworthy" from the table and sent a way the "sinners". Oh wait, I guess that he also got violent when the religious leaders turned the temple of the Lord into a greedy business for the elite. Pray for the Archbishop, that he is not in the awkward position of being charge when the Lord comes again.
--Matt