Since the air quality from the fires is too awful to even think about going out into it unless you have to I'm spending my lunch break at my desk ... taking a break from "Things Fall Calendar" by blog surfing and website meandering ... and (in the process) coming across this interview with the Bishop of New Hampshire I thought worth passing along ... in case YOU'RE looking for something to distract you for a few minutes from whatever it is you're supposed to be doing you're not doing or if you can't handle going outside to breathe during your lunch hour, either. This'll get you started: 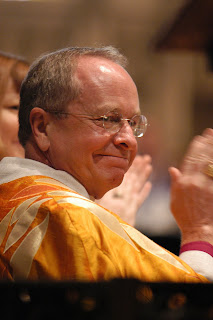 There is no missing Bishop Gene Robinson when he bounds in to the lobby of a London hotel, hand outstretched in greeting. Partly it's the outsize cheeriness, but mostly it's the purple shirt and large gold cross, which among the sensible City suits and dark skirts makes the statement he presumably would wish it to: that he believes in the Word, and would like others to do so too. He sits down, smiling, slightly too close. The ecclesiastical finery is accessorised with chinos and a pair of black and grey-checked slip-on trainers, worn without socks. "So. Tell me about you."

Robinson is here for the annual Greenbelt festival – music, talks, poetry and prayer on Cheltenham Racecourse, a kind of Christian Glastonbury (Robinson has never heard of Glastonbury) – and he is going, he says at one point, "because I seek to make Jesus known and loved by anyone who will listen. The opportunity to send that message to young people is a real goal of mine." He is also going, of course, because he is now, bar Archbishops Rowan Williams and Desmond Tutu, one of the most famous clerics in the Anglican communion: in fact, he is such a draw that two of his talks this weekend will be given in spaces that can hold 2,000 people.

As the church's first openly gay bishop, this short, determinedly smiley man may well trigger the first ever schism in the Anglican communion – as was endlessly rehearsed in the run-up to last year's Lambeth Conference. His election in 2003 as the Bishop of New Hampshire, the most conservative state in north-east America, has already been described as the greatest crisis in the church since the Reformation. By pointedly failing to invite Robinson to Lambeth (which did not stop a hard core of over 200 bishops staying away anyway) Williams was eventually judged to have just about held the whole shooting-match together.

But there was a lot of brinksmanship involved, and things are shifting again. Part of Williams's strategy was to require a general moratorium on the blessing of same-sex partnerships and the election of clergy in gay relationships to bishoprics until a general consensus could be thrashed out; in July, at their triennial general convention in Anaheim, California, the Episcopalians pointedly removed themselves from it. It was politely worded – the moratorium is technically in place until a diocese actually elects an actively gay bishop – but the fact is that there are two American dioceses, Minnesota and Los Angeles, which will be electing a bishop by the end of the year, and between them they are fielding one gay and two lesbian candidates.

Williams, in response, has suggested that the communion might have to resort, eventually (he does not do things in any kind of rush) to a two-tier, or "two-track" model.

Robinson's reaction is unequivocal. "I can't imagine anything that would be more abhorrent to Jesus than a two-tier church." A long pause. When he's not smiling his eyes are strikingly sad. "Either we are children of God and brothers and sisters in Christ, or we aren't. There are not preferred children and second-class children. There are just children of God."

Posted by SUSAN RUSSELL at 2:23 PM

Having been at all three talks +Gene gave at Greenbelt, I just wanted to say what a blessing his presence among us was. TEC and the Anglican Communion are lucky to have him.