Who goes to heaven? 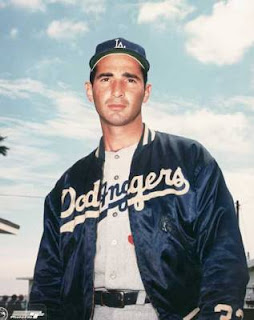 How could I not share this opinion piece (by Jerome Christenson from the LaCrosse Tribune) when it [a] comes from a Minnesota Lutheran who [b] makes such total sense and [c] uses Sandy Koufax to illustrate his point on inclusion?

WINONA, Minn. - When the pastor's wife is a man, the Ladies' Aid will never be the same. Especially when the pastor isn't a woman.

It's hard to figure what Martin Luther would have made of the whole thing.

The ELCA last weekend authorized congregations to hire non-celibate gay clergy who are living in a committed relationship.

Forty years ago, just suggesting such a thing anywhere near a Lutheran church would have made posting the 95 Theses a theological lullaby. More to the point, pretty much any talk about the subject likely would have started out … "These two guys came into a bar - holding hands … " and been talked about anywhere but in church.

When I was growing up, there were no gay people. Certainly no gay Lutherans, or none that anyone would admit to, anyway.

Good Lutherans had a sense of sin stronger than egg coffee from the bottom of the pot. I was brought up to take my "Thou shalt nots" seriously and it's hard to think of a "shalt not" more serious than that one … something so serious the only way you heard about it was in a dirty joke.

It was that Sodom and Gomorrah thing, you know. If a place was so bad that just looking back at it turned Lot's wife into a pillar of salt, those Sodomites just had to be people you wouldn't trust around your kids. (I always wondered what the people in Gomorrah did that the Lord found so annoying - guilt by association, I guess.)

Now in those days, long before three clicks on Google leaves nothing to the preadolescent imagination, we had neither the information nor the imagination to come to grips with the mechanics of the matter, and there was no one much inclined to enlighten us.

As far as the church was concerned, there were no gay folks in heaven, and that's all we needed to know about that.

At the time, that seemed reasonable enough to us. Heaven, after all, was billed as a pretty doggone exclusive place - if a place that looked a lot like small-town Minnesota could be called exclusive.

In any case, the rules for admission were written down for all time in black and white, and there'd be no debates and no loopholes when the last day rolled around.

The fact that Sandy Koufax refused to pitch the opening game of the 1965 World Series because it fell on Yom Kippur might have impressed some folks, Pastor Hanson told our Saturday morning confirmation class, but as long as he was a Jew he wasn't headed for heaven - a verdict I thought might be just a bit presumptive, considering the possibility that at least one of the three people of the Trinity might be a Dodger fan. But according to the pastor, rules were rules and the rules never changed …

Until they did. What at one time seemed reasonable seemed to take on a different cast. If Koufax wasn't going to Heaven, why were the chosen people chosen in the first place? Black and white blurred into softer shades of gray. Maybe those homos might make it to Heaven after all. Maybe it wasn't right to turn God's people into nothing more than a dirty joke.

And last weekend, the church I was brought up in officially changed its rules.

I'm certain that won't set well with some folks. For some folks, it will be just one more change they don't believe in.

No doubt they don't like it even one little bit. No more than they like so many of the changes they'd just as soon have had stay the same. It's just one more thing in their world, in their lives, they just can't count on any more. One more unthinkable thing they've got no choice but to think about. One more reason to stand up at a town hall meeting, to demand, "I want my country back."

After all, at one time, according to their rules, it was their country.

But the rules have changed.

And if we're going to have to share Heaven, we'd best get used to sharing our country. Their country. Your country. My country.

Our country.
Posted by SUSAN RUSSELL at 9:59 AM

I am not surprised that a Mid-Western newspaper writer should have such a second-grade knowledge of theology. After all, most newspaper writers studied journalism or English, not theology, in college.

What does surprise me is that you would (it appears, at any rate) consider his Sunday School lessons to be a representation of orthodox, conservative theology. I thought that you knew better than that.

If his childhood church used Luther's Catechism, he must have been asleep.

It's a personal story.

Where in all that did you "get" that I "consider his Sunday School lessons to be a representation of orthodox, conservative theology"????

The Sunday School lessons apparently are a lot more advanced than "conservative theology."

The Sunday School lessons apparently are a lot more advanced than "conservative theology."

How long has he been assaulting you with his "theological superiority?"

His god is bitterness, cruelty and self-righteousness - his god, in fact, is "the belly." Shake the dust from your feet.

Actually, Hiram and I have been going at since just about the time Al Gore invented the internet! :)

Church is boring-I don't care if it's conservative, bible-thumping or airy-fairy liberal Unitarian. Boring. Does nothing for me.
This generation (18-30)is over one fourth "None of the above".
I'm relieved. I hope we have an atheist president soon.