Truly amazing, challenging and inspiring reading for a Sunday afternoon: 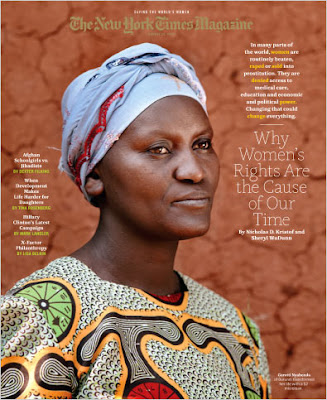 IN THE 19TH CENTURY, the paramount moral challenge was slavery. In the 20th century, it was totalitarianism. In this century, it is the brutality inflicted on so many women and girls around the globe: sex trafficking, acid attacks, bride burnings and mass rape.

Yet if the injustices that women in poor countries suffer are of paramount importance, in an economic and geopolitical sense the opportunity they represent is even greater.

“Women hold up half the sky,” in the words of a Chinese saying, yet that’s mostly an aspiration: in a large slice of the world, girls are uneducated and women marginalized, and it’s not an accident that those same countries are disproportionately mired in poverty and riven by fundamentalism and chaos.

There’s a growing recognition among everyone from the World Bank to the U.S. military’s Joint Chiefs of Staff to aid organizations like CARE that focusing on women and girls is the most effective way to fight global poverty and extremism. That’s why foreign aid is increasingly directed to women.

The world is awakening to a powerful truth: Women and girls aren’t the problem; they’re the solution.

Also in the issue: "A New Gender Agenda" (Interview with Hillary Clinton)

And I rather think that if we eradicated misogyny (sigh...) at least 90% of homophobia would disappear in a flash.

I LOVED it!! EVERYBODY should watch it!