It's Time for a "Protect Marriage" Movement that Protects ALL Marriages! 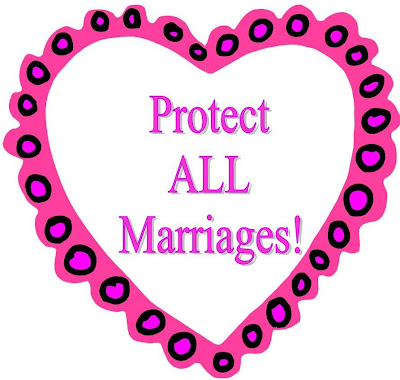 Thanks to yesterday's New York Times editorial for making the case so well:

In Defense of Marriage, for All

The 1996 Defense of Marriage Act is indefensible — officially sanctioned discrimination against one group of Americans imposed during an election year. President Obama seems to know that, or at least he has called on Congress to repeal it. So why do his government’s lawyers continue to defend the act in court?

The law, signed by President Bill Clinton, denies married same-sex couples the federal benefits granted to other married couples, including Social Security survivor payments and the right to file joint tax returns. When December’s repeal of the noxious “don’t ask, don’t tell” law goes into effect, gay, lesbian and bisexual Americans will be able to serve openly in the military but may not be entitled to on-base housing or a spouse’s burial in a national cemetery.

Attorney General Eric Holder and Justice Department lawyers have sought to distance the administration from Congress’s justifications for the marriage act, one of which was to “encourage responsible procreation.”

But just last month, the department appealed two rulings by Joseph Tauro, a federal trial judge in Massachusetts, who found that the law’s denial of benefits to married same-sex couples could not pass constitutional muster. We did not agree with some of the judge’s reasoning. He said the marriage act exceeded Congress’s powers and infringed on the state’s right to regulate marriage — an approach that could undermine many of the biggest federal social programs, including the new health care law.

But the department’s appellate brief also recycled the flimsy argument that the law had a plausible purpose in trying to maintain the federal status quo while states debated the issue of same-sex marriage. This argument was peculiar since the law overturned the federal status quo, which was to recognize all legal marriages.

Two new lawsuits, filed in Connecticut and New York, challenging the Defense of Marriage Act now offer the president a chance to put the government on the side of justice. We urge him to seize it when the administration files its response, which is due by March 11. The executive branch’s duty to defend federal laws is not inviolate. This one’s affront to equal protection is egregious.

As in the Massachusetts cases, there are two crucial questions here. The overarching one, of course, is whether it is constitutional for the federal government to deny benefits to some people who are legally married under their state’s laws. Much also depends on the standard of review. How should courts evaluate claims that a law discriminates against gay people?

On the merits, this should be an easy call. A law focusing on a group that has been subjected to unfair discrimination, as gay people have been, is supposed to get a hard test. It is presumed invalid unless the government proves that the officials’ purpose in adopting the law advances a real and compelling interest. That sort of heightened scrutiny would challenge the administration’s weak argument for upholding the act. It would also make it more difficult to sustain other forms of anti-gay discrimination, including state laws that deny same-sex couples the right to marry.

By now, such blatant discrimination should be presumed to be unconstitutional, and the Justice Department should finally say so. If conservatives in Congress want to enter the case to argue otherwise, so be it.

So here's hoping -- and praying and lobbying and organizing and fundraising and strategizing -- that next year when Valentine's Day rolls around we'll be able to celebrate not just the love between some couples but the love between ALL couples ... and that when we talk about "protecting marriage" we'll have taken more steps toward protecting ALL marriages ... not just some marriages!

Happy Valentine's Day, Everybody!
Posted by SUSAN RUSSELL at 1:44 PM

In defense of the administration (hard I voted for someone else -- no not McCain) it is the responsibility of the Justice Department to defend the power of Congress to write laws, even stupid laws.

We are a nation of laws and procedures, even when the procedures protect unjust laws. Fortunately, we have procedures to undo the unjust.

No actually, there is not a formal obligation to appeal. Americablog has numerous examples where the administration did not. Including this one.