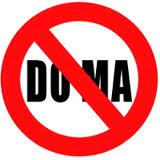 And here's what else I think:

Today’s “Tax Day” announcement by Speaker John Boehner that ex-solicitor general Paul Clement has been retained to defend the indefensible “Defense of Marriage Act” is an affront to every taxpayer committed to liberty and justice for all. And it is a slap in the face to the millions of gay and lesbian taxpayers who are being told by the House leadership’s action that they are only entitled to equal taxation – not equal protection – on the very day they write their checks to the IRS.

It is unconscionable that in the face of a budget crisis that threatens to reduce health care for the elderly and education for our children that the House leadership is going to spend taxpayer money to defend DOMA – a law that reduces same-sex couples to second-class citizens.

We need a Protect Marriage Movement that protects all marriage and Family Values that value all families. Until we end the blatant and indefensible discrimination of DOMA we are not living up to the pledge we make to be a nation of liberty and justice for all, we are not providing the equal protection guaranteed by the 14th Amendment equally and we are failing to defend the self-evident truth that our forbearers fought to protect: that all people are created equal.
Posted by SUSAN RUSSELL at 5:23 PM