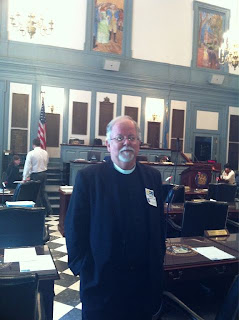 In between proofing liturgies for the Great Vigil of Easter, writing a Palm Sunday sermon and preparing for my Lenten Small Group tonight on our Baptismal Promises, I had one eye on my TweetDeck watching Mark Harris live-tweeting from the State House in Delaware as the Civil Unions Bill came to the floor for a vote. (that's him ... pictured left ... in a photo he posted to Twitter "just before the session.")

Delaware will be the eighth state to offer civil unions or comprehensive domestic partnerships. After the bill is signed into law, it will take effect on Jan. 1, 2012. Currently, five states have laws providing an expansive form of state-level relationship recognition for gay and lesbian couples, without offering marriage. California, Nevada, New Jersey, Oregon, and Washington provide same-sex couples with access to almost of all the state level benefits and responsibilities of marriage, through either civil unions or domestic partnerships.

And we add to that list the jurisdications with marriage equality: Massachusetts, Connecticut, Iowa, New Hampshire, Vermont and Washington D.C.

The arc is bending, folks. Let us rejoice and be glad in it. And then let's get back to work. After we take a minute to say Well Done Delaware!!
Posted by SUSAN RUSSELL at 6:04 PM