How come there was no "birther" movement over THIS one?????

This was a comment by "dr primrose" on an earlier post ... and I deemed it too good to be buried in comment-land. Facinating facts, good question and sad commentary! 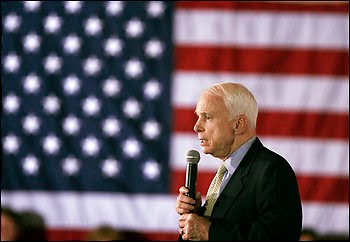 Let's compare the controversy over Obama's birth with that over Obama's opponent in the 2008 election, John McCain.

McCain said he was born in the U.S. Canal Zone although no records have been found supporting his birth there. McCain did have a birth certicate and there was a story in a local newspaper announcing his birth.

Because the U.S. Canal Zone was then a U.S. territory, not a U.S. state, there was in fact a bona fide dispute as to whether McCain was a "natural born citizen" of the U.S., a requirement to become the U.S. president.

Before the 2008 election two leading attorneys, one Democratic and the other Republican, concluded that McCain met the constitutional requirement. The United States Senate unanimously passed a resolution finding that McCain was a "natural born citizen."

You can read all the details in this Washington Post article -- McCain's Birth Abroad Stirs Legal Debate: His Eligibility for Presidency Is Questioned.

While this legal support would have had no binding affect on any court, the issue seemed to have completely dropped away six months before the election.

Compare this to Obama. There's been no evidence whatsoever that he was born anywhere else other than Hawaii. The state has made public the "short form" birth certificate -- which is valid for all legal purposes -- for years. And there was even a newspaper story of his birth in the Honolulu newspaper. And despite all the evidence supporting one side, this issue has not dropped away like it did for McCain. And you have one presidential candidate beating on the birther drum and the Speaker of the House saying the issue was beyond his pay grade (even though the Senate unanimously supported McCain on this issue),

So what's the difference between the treatment of McCain and Obama? Politics, yes, of course. But racism appears to be a pretty good answer, too.
Posted by SUSAN RUSSELL at 4:36 PM

Lest we forget, he is white. I am just sayin.

Unofficially, it was the Arnold bill. Or more correctly, the "Awnald" bill, as in Arnold Schwarzenegger, the box office terminator and then-governor of California.

Arnold’s charisma electrified GOP convention goers in New York City in 2004 but he was ineligible to run for president because he was born in Austria. Hatch proposed amending the U.S. Constitution to make it possible because he felt it would be terribly unfair to deny anyone the right to become president just because they were not born in the U.S.

Well, that's the thing. I don't see what is so heroic about going from being a spoiled rich brat to failing a military assignment and failing to die in the failure.

He suffered? So do other people, pretty much everyone, every day, and often because of the policies twerps like McCain help put and keep in place.

McCain was a military man who failed in his assignment. People like him like to hold up the Spartans as an image of the great soldiers of history - he would've shamed a Spartan family because he didn't come home carried on his shield.

Sorry, but I had to get that off my chest, as that seems to be the man's one claim to any sort of recognition or respect!