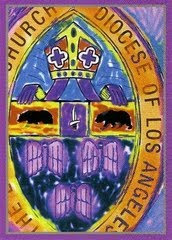 "Hot off the Presses" is this news release from my home Diocese of Los Angeles:

[The Episcopal News, Los Angeles] -- Thanking the Anglican Communion for “taking this time of discernment” to develop the proposed Anglican Covenant, elected representatives of the Diocese of Los Angeles have issued a response declining to endorse the document.

"We cannot endorse a covenant that, for the first time in the history of The Episcopal Church or the Anglican Communion, will pave the way toward emphasizing perceived negative differences instead of our continuing positive and abundant commonality," states the response, signed jointly by the diocese’s bishops and General Convention deputation.

Here's a link to the statement in its entirety and here's a video that helps outline the extensive process we have gone through here in the Diocese of Los Angeles as we've considered the proposed Covenant.

Makes me proud to be an Episcopalian ... proud to be an Angeleno ... and proud of the leadership for Bishop Glasspool in this process and of my colleague Carissa for her "right on" quote in the video: "Any covenant or legislation that might eclipse our ability to embrace our own diversity would be a mistake." And let the people say a big old AMEN!

Posted by SUSAN RUSSELL at 2:25 PM

This is good news. The Diocese of Los Angeles has shown integriy by rejecting the Covenant. This may also mean the Covenenat will achieve its goals to maintain a Communion for those that choose to opt in.