to your servants with your saints:
where sorrow and pain are no more;
neither sighing but life everlasting. 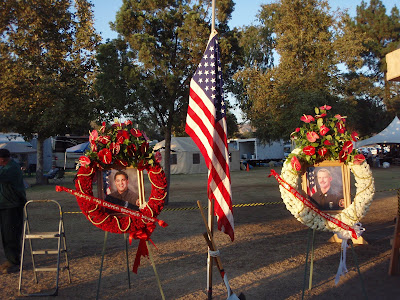 This photo came in an email update from clergy colleague Michael Bamberger -- who is also a volunteer firefighter in his foothill community of Sierra Madre.

As we continue to offer prayers in thanksgiving for the lives of the two firefighters lost in this (now determined to be arson caused) immense wildfire, we're also keeping in our thoughts and prayers those who continue to battle the flames on "the other side of the mountain."

It is about 155,000 acres and at 44% containment – the biggest fire in Los Angeles County in recorded history. Every major watershed in the Los Angeles basin has been burned out. The most visited National Forest available to an urban population in the United States will be unavailable for who knows how long, Two firefighters have died and dozens have been injured. Civilian injuries have been limited, thankfully, and most were due to people refusing to evacuate
as advised. 64 homes and several businesses have been lost. It will take years for us to calculate the losses, and centuries for the forest to recover.

And we’re not “out of the woods” yet. There is still an awful lot of open “line” and some of the most critical is right above Sierra Madre. The next few days will be critical. We need favorable winds, lower temperatures and higher humidities. And a lot of hard work by the ground-pounder firefighters, dozers and aircraft.

Here endeth the update from the So Cal Fire Front. (But do keep the prayers coming this way!)
.