What a difference almost-a-decade makes! 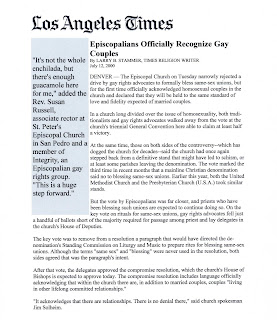 So in preparation for Integrity's "After Anaheim" conference happening in St. Louis (starting tomorrow!) I've been doing some archive perusing in order to put together the powerpoint I'll be presenting.

In the process, I came across this July 2000 feature by then LA Times Religion Writer Larry Stammer. I saved it originally because it had my "It's not the whole enchilada but it has enough guacamole for me" quote -- regarding the passage of D039 ... the resolution that recognized for the first time that there WERE gay couples in the church.

Anyway, what caught my eye THIS time was this bit:

"If the resolution makes them feel good, OK. But I don't see it as any major advance for them," said the Rev. David C. Anderson of St. James Episcopal Church in Newport Beach, a leader of the American Anglican Council, a traditionalist group. When delegates voted to delete the paragraph calling for same-sex rituals, gays had lost the battle, Anderson said.

Really???? I thought this one was listed on their long list of straws-that-broke-the-Anglican-Communion's back! At least that's how it's been "spun" ever since.
Anyway, thought you might enjoy this little peek into the "way back" machine ... so here's the whole text of the piece (more later!)

DENVER — The Episcopal Church on Tuesday narrowly rejected a drive by gay rights advocates to formally bless same-sex unions, but for the first time officially acknowledged homosexual couples in the church and declared that they will be held to the same standard of love and fidelity expected of married couples.

In a church long divided over the issue of homosexuality, both traditionalists and gay rights advocates walked away from the vote at the church's triennial General Convention here able to claim at least half a victory.

At the same time, those on both sides of the controversy--which has dogged the church for decades--said the church had once again stepped back from a definitive stand that might have led to schism, or at least some parishes leaving the denomination. The vote marked the third time in recent months that a mainline Christian denomination said no to blessing same-sex unions. Earlier this year, both the United Methodist Church and the Presbyterian Church (U.S.A.) took similar stands.

But the vote by Episcopalians was far closer, and priests who have been blessing such unions are expected to continue doing so. On the key vote on rituals for same-sex unions, gay rights advocates fell just a handful of ballots short of the majority required for passage among priest and lay delegates in the church's House of Deputies.

The key vote was to remove from a resolution a paragraph that would have directed the denomination's Standing Commission on Liturgy and Music to prepare rites for blessing same-sex unions. Although the terms "same sex" and "blessing" were never used in the resolution, both sides agreed that was the paragraph's intent.

"It acknowledges that there are relationships. There is no denial there," said church spokesman Jim Solheim.

The resolution makes clear the church expects couples--whether gay or straight--to be faithful to each other. "We expect such relationships will be characterized by fidelity, monogamy, mutual affection and respect," the resolution states, adding that "we denounce promiscuity, exploitation and abusiveness in the relationships of any of our members."

Because of the resolution, "the church is on official record saying that it recognizes same-sex couples are in the church. It has never said that before," said the Rev. J. Edwin Bacon Jr., rector of All Saints Episcopal Church in Pasadena, where priests have long officiated at gay and lesbian unions. The resolution will lead to an escalation of same-sex blessings "as never before," he predicted.

"It's not the whole enchilada, but there's enough guacamole here for me," added the Rev. Susan Russell, associate rector at St. Peter's Episcopal Church in San Pedro and a member of Integrity, an Episcopalian gay rights group. "This is a huge step forward."

"If the resolution makes them feel good, OK. But I don't see it as any major advance for them," said the Rev. David C. Anderson of St. James Episcopal Church in Newport Beach, a leader of the American Anglican Council, a traditionalist group. When delegates voted to delete the paragraph calling for same-sex rituals, gays had lost the battle, Anderson said.

In an hour long debate, opponents of same-sex unions repeatedly warned that their parishioners would leave the church if the convention--the church's highest policymaking body--ordered the preparation of liturgical rites for blessing same-sex unions.

"I can imagine no recipe for greater confusion or further division than this," said the Rev. J.A. Cook of the Western Louisiana diocese.

But a delegate from Mississippi said the time had come to set aside hatred of gay men and lesbians, as the church had set aside biblical justifications for slavery.

Ahead of the vote, advocates on both sides pressed their cases in styles reminiscent of a political convention. The conservative American Anglican Council rented the entire third floor of the nearby Denver Athletic Club as a command center. About 200 volunteers put out daily briefings, and a legislative report for delegates recommending how to vote on hundreds of resolutions.

Integrity set up headquarters at a local hotel and reported it had 70 volunteers.
Posted by SUSAN RUSSELL at 4:10 PM

I LOVE It! You guys are so funny!

A Command Center? Really? Why in the history of the world can't you not have emphathy with conservative Aglicans and tell them we need to split or something else? Hell I can do that I am a ATHEIST and I live with an Independet Baptist. How can both side be so BLIND!

2) I was hoping we could use your ‘scribing’ talent for our website.

The Best Shows Youre Not Watching (dot) com [all one word]

Frontline is one of our featured shows. We’re hoping to round up a few people who can occasionally contribute perspective (via an article/blog) on the shows – maybe a recent episode, future direction, plot shortcomings etc.

What’s in it for you?
Primarily a larger audience back channeled to your blog. We don’t pay but the site has a lot of promise and we're pretty excited about getting it off the ground. Let me know what you think.