Day of Prayer for Uganda 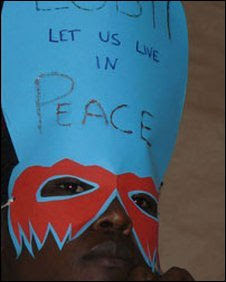 If you're not in the loop on this one, here's the summary from Father Jake:

The Uganda Anti-Homosexuality Bill is a nasty piece of work which would make the death penalty the sentence for some homosexual acts.

Anglicans have been urged to condemn this bill, but so far there has been silence from Canterbury and York. The Anglican Church of Uganda backpedaled just a little from their normal strident homphobic stance, suggesting that the death penalty may be a bit much (you think?). But not a word from Henry Orombi, which I suppose isn't a big surprise, considering his past performance when confronted with the suffering and torture of gay and lesbian Ugandans.

Do read the rest of Jake's post here ... which includes details on today's World Day of Prayer for Uganda and this prayer:

Look with pity, O heavenly Father, upon the people in every land who live with injustice, terror, disease and death as their constant companions. Have mercy upon us. Help us to eliminate our cruelty to these our neighbors. Strengthen those who spend their lives establishing equal protection of the law and equal opportunities for all. And grant that every one of us may enjoy a fair portion of the riches of this world, through Jesus Christ our Lord. Amen

The Anglican Church of Canada has issued a strong statement condemning the legislation (and so has Integrity) but so far nothing from Canterbury. Or New York.
So here's what ... let's all take a minute out of our busy day to drop a note to +Katharine asking for a word of hope from TEC to the LGBT Anglicans in Uganda. Join me in and add your voice to those working to turn those resolutions we pass into realities ... to speak out for the last, the least and the lost ... to proclaim the year of the Lord's favor to those held captive by fear, intolerance and homophobia.
Click here. Now. Do it. Speak up. If we don't, who will?
UPDATE: Here's mine:
Dear Bishop Katharine,

I write to join my voice with those asking you to speak out on our behalf and in opposition to the pending draconian anti-gay legislation in Uganda. As you know, the Anglican Church of Canada has spoken out and we who pray for the healing of homophobia throughout the whole human family urge our Episcopal Church to go and do likewise.
.
At your investiture you called us to join with you in proclaiming the Year of the Lord's Favor in releasing the captive and speaking out for the least, the last and the lost. I urge you to claim for us your authority to proclaim that good news to those LGBT people yearning to hear it in Uganda.
.
Thank you and my God continue to bless your work and your witness on behalf of God's inclusive love.