Support ENDA: THE TIME HAS COME!

Here's online the letter I just signed to support ENDA ... the Employment Non-Discrimination Act wending its way through Congress:

As clergy and faith leaders from a broad diversity of religious traditions, we call on you to support H.R. 3017 and S. 1584, the Employment Non-Discrimination Act (ENDA), to ensure the fair treatment of Lesbian, Gay, Bisexual, and Transgender (LGBT) Americans in the workplace.

We believe it is immoral to deprive anyone of the means to feed, clothe, and care for themselves and their families. When LGBT people are denied the right to work simply for living honestly, their basic humanity is fundamentally denied. As pastors, imams, rabbis, ministers, pandits, clerks, and local faith community leaders, we know firsthand the devastating effects the loss of a job can have on individuals, families, and communities. Though we are all pained by the economic hardships befalling our nation, loss of a job because of discrimination against one’s identity incurs an even more devastating sense of personal loss and humiliation. This prejudice is not benign – it hurts real families in our congregations.

We affirm the sacred dignity and worth of all human beings – lesbian, gay, bisexual, transgender, and straight, men and women – for all are created equal, a reflection of the divine (Genesis 1:27; Mosnad Ahmad, #22978). Our faiths unite us in a moral obligation to treat others with the respect we desire for ourselves and to pursue justice by preventing further harm from coming to those most marginalized by our society (UdanaVarga 5:18; Mahabharata, Anusasana Parva, 113.8; Isaiah 10:1-2; Matthew 25:40). As heirs to these prophetic traditions, and indeed the narrative of this nation, our advocacy is grounded in the belief that advancing equality also means ensuring economic opportunity for our LGBT brothers and sisters. Swift enactment of an inclusive Employment Non-Discrimination Act is needed.

ENDA is a common-sense, measured approach to removing discriminatory barriers to employment for LGBT people while respecting the sacred texts and teachings of America’s diverse faith traditions. This bill broadly exempts from its scope all religious organizations protected by Title VII of the 1964 Civil Rights Act thereby honoring the free exercise of religion and conscience we each hold dear as religious leaders in our respective houses of worship, seminaries, religious federations, organizations and other faith-based institutions.

Extending the full, long overdue rights and responsibilities of citizenship to the LGBT community is a pressing moral, social and economic priority. We urge Congress to pass the Employment Non-Discrimination Act (H.R. 3017, S. 1584) to uphold the American promise of justice and equality for all.
Add Your Support

As a faith leader, I affirm the right of all people to earn a living and be treated fairly in the workplace.

If you agree, go (here) and do likewise. Because it's crazy that in two-thousand -almost-ten people can still be FIRED FROM THEIR JOBS just because they are (or appear to be) gay or lesbian, bisexual or transgender. And we've waited FAR too long for a president who would sign the bill that we're working to pass.

I was doing some photo archiving for a diocesan convention project and came across this picture from a Pride Parade Past ...
. 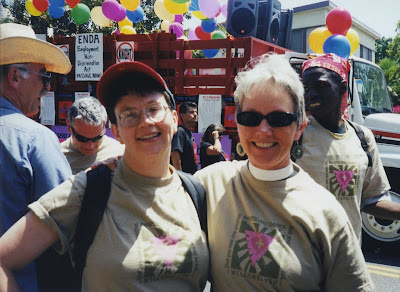 See there in the background? The sign on the truck with the balloons? That's right -- ENDA. That was 1999, folks. Ten years ago. And we're still at it. Time to move forward on this one the way this congress finally did on hate crimes.

They can do it. You can help. Sign on to the letter of support. And stay tuned for what else we can do to move this one from the "things left undone" column to the "DONE!" column!
.
Posted by SUSAN RUSSELL at 3:50 PM

I'd really like to see some "laws" that protect white males and Christians.

I know there is a lot of focus on GLBT rights, but sometimes I think there should be more focus on human rights.