EDITORIAL FROM THE KENNEBEC JOURNAL:

Vote 'no' on Question 1 Support all Maine families 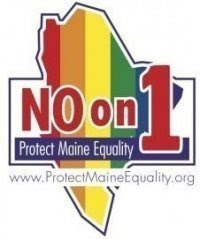 Sometimes the law has to move quickly to keep up with a reality that has developed over time.

Maine voters will be faced with that kind of change on Nov. 3, when they are asked in Question 1 to reject a law that would extend civil marriage status to same-sex couples.

While this change in the law could seem abrupt to some Maine voters, it reflects the way people are really living now in cities and towns all over our state. That's why we urge people to vote "no," to allow this reasonable law to go into effect.

Leaders of the people's veto campaign argue that extending the rights and responsibilities of civil marriage to families headed by same-sex couples would have broad effects throughout society. We have listened to their arguments, but we just don't buy them.

Read the rest of the editorial here -- and do keep the good people of Maine in your prayers as they go to the polls tomorrow.
Posted by SUSAN RUSSELL at 2:39 PM

Maine is a liberal state. But have this is the good old US of A, so you never know what is going to happen.

I grew up in New Hampshire close to both the Maine and Massachusetts borders. Massachusetts was always the state we called "liberal". Maine is pragmatic. And I'm hoping that its close proximity to other places in New England where granting LGBT people equality has not resulted in the Earth spinning off its axis will result in the people rejecting this amendment. "No One" should be discriminated against in Maine... or anywhere else. Prayers ascending for them, and the people of Washington state and Kalamazoo, Michigan.

That makes gay "marriagee" 0-31 in every state it's been put to a vote. How is it that legislators get it so wrong so consistently?

SCG: I grew up in Massachusetts myself. Maine, indeed, was always the most pragmatic state - more sensible, more down to earth. They've certainly shown it in this election.

Maine was to be part of Massachusetts until 1820. "That's how it's done in Massachusetts" has historically been an excellent way to condemn a proposed course of action in Maine. Rarely do people in Maine like much of what they see when they look south.

Ron -- because legislators are elected to represent ALL the people and referendums on the civil rights of a minority should never be left up to the will of the majority. If Brown v Board of Education had been subject to a referendum we'd still have segregated schools. Sad day for Maine. Sad day for traditional American values of liberty and justice for all.

uffda51, we all have the same rights. I can marry someone of the opposite sex and so can you. The fact that I desire to do so and the fact that you may not (I don't recall if you've ever discussed your own sexual preferences here) does not mean that you are being denied your rights.

You will perhaps argue that same-sex couples are being denied the right to marry someone that they love. But that's not a right. Marriage laws don't talk about love - and thank God for that. The State has no business defining what love is and whose and what kind of love relationships are properly based on. No, marriage under the sanction of the State is dependent on objective criteria such as age, consanguinity (sp?), intent to defraud the principles of immigration laws, etc. There's no requirement for the two people involved to love each other, so how can the right to marry under the law be required on the basis that two people profess love for each other? Love has nothing to do with the law.