Keeping an eye on the Archbishop (of Canterbury) 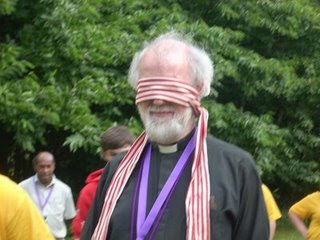 It wasn't my week to watch him. The ABof C, that is. In fact, Easter Week is customarily a week to catch up with all the UN-churchy stuff that got neglected as the Lenten pace picked up and Holy Week & Easter rolled into town. But doesn't it just figure that when you're NOT paying attention to him, he actually says something? (Making one wonder if perhaps "watched pots" and "Archbishops of Canterbury" might not have something in common!)

Anyway, here's the breaking news from the headline of a Guardian editorial on Williams' response to the clergy abuse scandal in the Roman Catholic Church in general and the Irish Church in specific:

I thought it was my uncharitable Yankee-ness that made me immediately think that the Archbishop of Canterbury actually saying something "completely straightforward" was in itself newsworthy ... BREAKING newsworthy, even ... never mind what he actually said.

And then I read the beginning of the editorial and thought -- hmmm ... guess it isn't just me after all!

Rowan Williams has developed a reputation for obliquity in his time at Canterbury: a man for whom to um is human, but to er, divine. But every now and then he says something completely straightforward, without hesitation.

Nope. Not just me. This is evidently kind of a first. And if the reaction is any indication, it may just be the last.

So what did the Archbishop SAY to attract all this press and attention? Glad you asked. As the Guardian goes on to explain,

This morning the BBC will broadcast his recorded remarks on the Irish Catholic crisis, in which he says, quite in passing, that the church there has "lost all credibility".

Right. And the other "breaking news" is that the Pope is still Catholic.
.
You can read the rest of the Guardian piece here ... and Episcopal Cafe is following the story here ... but here's what I want to know:

How do we make sense of the fact that the Archbishop of Canterbury is now apologizing to the Roman Catholic Church in Ireland for statements he made about "lost credibility" over clergy abuse but has not YET apologized to LGBT people for failing to speak on their behalf in Uganda while leaping to "regret" the election of a lesbian bishop in Los Angeles? The mind boggles!

"Perhaps while Rowan is in touch with his backbone, he might want to make a comment about homophobic bishops in the Southern Cone."

Perhaps. But this would be me ... not holding my breath!
Posted by SUSAN RUSSELL at 4:20 PM

Were he to actually say something about homophobic gay bishops in the Southern Cone I at least might need paramedic services! Not that I have anyone in mind...

Because he has been wishy-washy, and expressing regret, I heard the clip of his criticism of the Irish RCs and thought, "Well, while we're talking about lost credibilty, ++Rowan, let's talk about the church leader who has regrets about LA, but refuses to condemn the gay-bashing in Africa."