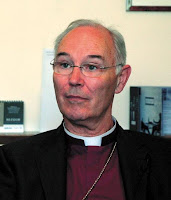 Been in the news a bit, has Church of Ireland Anglican Archbishop Alan Harper.

One might think he would have his hands full, what with Holy Week, Easter and all ... but evidently there's still a bit of time left over to hold forth about what's on his mind about what's going on in the rest of the Anglican Communion.

He led off with this critique of the Archbishop of Canterbury's remarks about the clergy abuse scandal rocking the Roman Catholic Church in Ireland:

“The remarks of the Archbishop of Canterbury, over which admittedly he has now expressed regret, which described the Roman Catholic Church in Ireland as having lost all credibility, were not helpful.” [source link]

And then he followed up with this response to the "coming soon" consecration of Mary Glasspool as a bishop suffragan in the Diocese of Los Angeles:

Anglican Archbishop Alan Harper has expressed his "deep regret" that the U.S.-based Episcopal Church has given its consent to the election of Los Angeles Bishop-elect Mary Glasspool. [source link]

So just so we're getting this straight (so to speak) ... he regrets that the Archbishop of Canterbury (which he himself has now regretted, but don't get me started on that again) who pointed out that hiding the abuse of children by pedophile priests contributes to the church's loss of credibility.
.
And then he further regrets that the American Episcopal Church has consented to the election of a fabulously qualified, duly elected-by-the-Diocese-of-Los Angeles bishop suffragan because of its potential to cause "stresses within the communion at a time when consultations on an Anglican covenant are at an advanced stage."
Here's what I regret: That those with the power to proclaim the Year of the Lord's Favor ... to free captives, bring good news to the poor and liberate the oppressed ... that those guys with that power are so busy "regretting" challenges to the institutional church that they don't appear to give a rat's tail about the Body of Christ getting on with the work of being Jesus' hands and feet in the world.
Now, Archbishop Harper may be a very fine chap. Never met him. He probably DOES give a rat's tail about the Body of Christ or he wouldn't be an archbishop.

But what I'm talking here is the impact of what he says. And while I'm talking about it, I'm looking at him as an icon of lost credibility.
Because for those strangers at the gate who are wondering when the church is going to step up and actually be a relevant force for peace, justice and compassion in the world -- when it's going to practice what it preaches -- when it's going to put more energy into caring for "the least of these" than it does into protecting the power of "the purple of these" -- well, they don't give a rat's tail about an Anglican covenant or any of the other bits and pieces of institutional churchdom. And nor should they.
And when they hear an Anglican Archbishop holding forth about regretting it when the Archbishop of Canterbury -- in a rare moment of candor -- speaks the truth about the impact of clergy abuse on the credibility of the church then they shake their heads and walk away ... if, indeed, they're even listening anymore -- and who would blame them if they weren't.
Finally, here's what I regret the most: that our mission and ministry in the Episcopal Church -- our call to proclaim the Good News of God in Christ Jesus to all people -- has been held hostage to this institutional ecclesiastical foolishness for so long.
Here endeth the rant. Alleluia. Amen.
Posted by SUSAN RUSSELL at 6:59 PM

I regret the horrible spectacle of an archbishop defending child molesters and acting homophobicly.

I rejoice that there is an ocean between him and us.

Again, there's an instinct among OUR hierarchy to tiptoe with kid gloves in dealing with Rome. Not the way to go. How many times do I have to tell them that a catholic is not usually Roman? We need to confront Rome, not bow down to it.