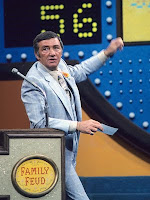 No, it's not a remake of Family Feud.

It's an important new survey being released tomorrow at a press event here in Los Angeles. The media release is posted below ... but in a nutshell:

A new survey of over 3,000 Californians being released on Wednesday, July 21, finds only one-in-five Californians believe passage of Proposition 8 is a "good thing" for the state.

More details once we get a look at the data ... but coming on the heels of the DOMA decision this new survey is welcome indeed. Stay tuned!

A comprehensive new poll examining religious based attitudes on same sex marriage says only one-in-five Californians agree that Proposition 8 is a "Good Thing" will be released and discussed by a distinguished panel on Wednesday, July 21.

The survey is the most comprehensive breakdown by religion of where Californians stand on same sex marriage since Proposition 8 was approved nearly two years ago. The report, which will be released in its entirety at 1:00 p.m. on Wednesday, July 21, 2010 in the Crocker Room at the Omni Los Angeles Hotel (251 South Olive Street), examines the role of religion on attitudes about a number of gay and lesbian issues including: marriage, adoption,gay and lesbian people serving in the military, and workplace discrimination. The report highlights shifting attitudes within the African American community, deep divisions within the Latino community, the influence of clergy on parishioners, and insights about the role religion plays in the Proposition 8 debate.

The bilingual (Spanish and English) poll was conducted by Public Religion Research Institute (PRRI) and funded by the Evelyn and Walter Haas Jr. Fund with additional support provided by the Ford Foundation. Over a two week period at the end of June, PRRI surveyed 2,801 Californians and additional oversamples of African Americans and Latino Protestants to allow for in-depth analysis of these groups.

What:
Public Religion Research Institute will release new findings from a survey of Californians on support for same sex marriages and a range of other gay and lesbian policy issues. The PRRI
report will include the most comprehensive breakdown of support by religious groups to date and analysis of the impact of religious beliefs on issue support.

Diane Winston, Ph.D.
Knight Chair in Media and Religion,
Annenberg School for Communication at the University of Southern California