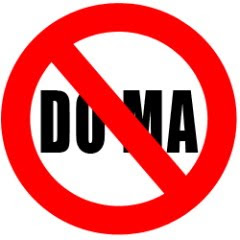 BOSTON — A U.S. judge in Boston has ruled that a federal gay marriage ban is unconstitutional because it interferes with the right of a state to define marriage.

The state had argued the law denied benefits such as Medicaid to gay married couples in Massachusetts, where same-sex unions have been legal since 2004.

Tauro agreed, and said the act forces Massachusetts to discriminate against its own citizens. The act "plainly encroaches" upon the right of the state to determine marriage, Tauro said in his ruling on a lawsuit filed by state Attorney General Martha Coakley.

In a ruling in a separate case filed by Gays & Lesbian Advocates & Defenders, Tauro ruled the act violates the equal protection clause of the U.S. Constitution.

"Congress undertook this classification for the one purpose that lies entirely outside of legislative bounds, to disadvantage a group of which it disapproves. And such a classification the Constitution clearly will not permit," Tauro wrote.

His rulings apply to Massachusetts but could have broader implications for other states where gay marriage is legal if it's upheld on appeal.

The Justice Department argued the federal government has the right to set eligibility requirements for federal benefits — including requiring that those benefits go only to couples in marriages between a man and a woman.

Opponents of gay marriage said they were certain the rulings would be overturned on appeal.

Andrea Lafferty, executive director of the Traditional Values Coalition, called Tauro's ruling "judicial activism" and said Tauro was a "rogue judge." Gay marriage advocates will keep pushing their agenda in the courts, she said, but noted voters often reject gay marriage at the ballot box, including in a recent California vote.

"We can't allow the lowest common denominator states, like Massachusetts, to set standards for the country," Lafferty said.

The law was enacted by Congress in 1996 when it appeared Hawaii would soon legalize same-sex marriage and opponents worried that other states would be forced to recognize such marriages. The lawsuit challenges only the portion of the law that prevents the federal government from affording pension and other benefits to same-sex couples.

Since then, five states and the District of Columbia have legalized gay marriage.

I'm still waiting for the conservatives to explain to us how 6 years of legal marriage in MA has injured any straight marriage or straight family. But themedia gives them a bye on this as well as everything else.