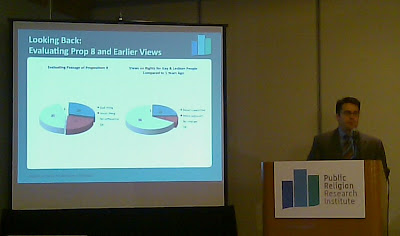 That's the "breaking news" today on the California marriage equality front. The Public Religion Research Institute issued its comprehensive new poll examining religious based attitudes on same-sex marriage -- and while the findings confirmed lots of things we already knew (or believed we knew!) there were also some surprises.

• One-in-four Californians report that their views on rights for gay and lesbian people has become more supportive over the last five years, compared to only 8% who say they have become more opposed.

• There are major religious groups on both sides of the debate over same-sex marriage in California. Solid majorities of Latino Catholics and white mainline Protestants say they would vote to allow gay and lesbian couples to marry.

And here's another take-away from the analysis of the data from the press conference this afternoon:

A significant number of Californians who initially say they support civil unions but not same-sex marriage are willing to support marriage equality if the law addresses either of two basic concerns about religious marriages.

When presented with an assurance that the law would guarantee that "no church or congregation would be required to perform marriages for gay couples" nearly one-third of Californians who intially only supported civil unions are willing to support same sex-marriage. With this assurance, support increases 12 points -- from 42% to 54%.

Similarly, when Californians are presented with an assurance that the law "only provided for civil marriages like you get at city hall" more than half of Californians who initially supported only civil unions are willing to support marriage equality. This assurance results in a 19 point increase -- from 42% to more than 6-in-10 (61%).

So what does all this mean?

It means that when presented with the truth, fair minded Californians will make the right decision.

And so it means that John 8:32 should become the proof text for the marriage equality movement: "You will know the truth, and the truth will set you free."

It means that the myth that "people of faith" are opposed to equality is exactly that -- a myth. 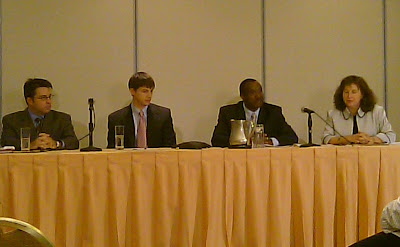 Finally, in the words of the Rev. Madison Shockley, Pastor of Pilgrim United Church of Christ, Carlsbad, CA -- a member of the panel at today's press conference -- "Information helps." And the education campaign needs to be happening NOW as we continue to tell the truth that will set us free to truly be the nation conceived in liberty and dedicated to the proposition that ALL people are created equal that we are meant to be.

Because it turns out that religious people have a VARIETY of opinions on everything ... including marriage. And at the end of the day what matters when it comes to civil marriage equality isn't what one pastor says the Bible says -- it's what the Constitution say. And NOBODY has the right to write their theology into our Constitution.

Are you listening, Judge Walker?
Posted by SUSAN RUSSELL at 6:30 PM

those polls are encouraging.

most of all, I'm glad to see that factual information is getting out there. it's having an obvious effect.

The right to marry is fundamental. The fundalmentalness of that right comes from God and not from majority opinion.