California Faith for Equality Speaks Out

[Honored to be among such a great cloud of witnesses!] 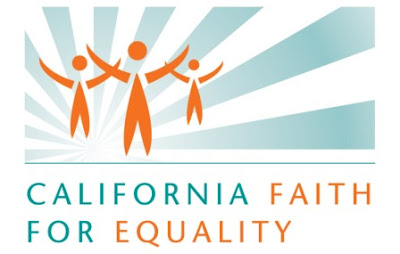 "CFE calls for good people of all faiths to speak out against the National Organization for Marriage (NOM) for allowing a supporter to carry a sign painted with two nooses implying that LGBT people should 'be put to death' and quoting the Book of Leviticus from the Bible or a pastor to compare gays and lesbians to pedophiles, adulterers and alcoholics," said Samuel M. Chu, Executive Director of California Faith for Equality (CFE). "We can no longer tolerate the spread of organized homophobia and spiritual violence perpetuated under the guise of 'protecting marriage. It must be stopped!"

The Rev. Canon Susan Russell, an Episcopal priest, said, "We cannot allow the Bible to be used as a weapon of mass discrimination and disinformation. Good people of faith are outraged at watching their scriptures exploited to condemn the holy relationships of gay and lesbian couples that are blessed by God. As a member of CFE, I join thousands of clergy, lay leaders and congregations who support these couples, who celebrate their love, bless their relationships and lobby for their equality."

"Recent polls reveal that 51% of Californians support marriage equality," said Chu. "CFE will continue to organize a faith based response to organizations such a NOM which spew hatred and fear rather than love and acceptance. It is only a matter of time for marriage equality to become a reality. We represent more than 6000 California clergy and faith leaders committed to equality and we will continue to raise those voices up until there is liberty and justice for all."
Posted by SUSAN RUSSELL at 2:42 PM