Don’t Be In The Wrong Palm Sunday Procession! 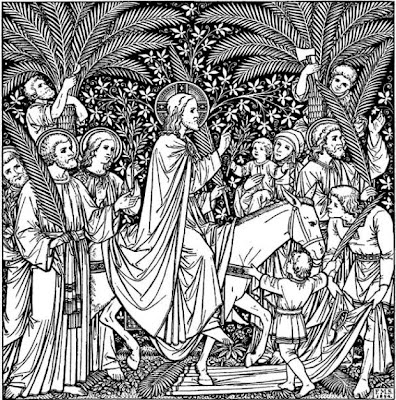 Preaching Peace on Palm Sunday, from That We All May Be One:
“We begin with Palm Sunday. Two processions entered Jerusalem at the beginning of the week of Passover, a tinderbox time in the city, with the Jewish people celebrating divine deliverance from the past Egyptian Empire while under the present Roman Empire. Two very large and very lethal riots took place precisely at Passover in the generations before and after (the year) 30 CE.
And so, at each Passover, the Roman governor — Pilate in the time of Jesus — rode up to Jerusalem from the imperial capital Caesarea on the coast at the head of a cohort of imperial cavalry and troops to reinforce the Roman garrison in Jerusalem as a deterrent against and preparation for any possible trouble. Pilate’s procession, arriving from the west, symbolized and actualized Roman imperial power.
Jesus entered the city from the east in another procession, a counterprocession. Whereas Pilate rode into the city on a war horse, Jesus entered on a donkey. Mark makes it clear that Jesus planned it in advance: he tells his disciples to go into a village to get a donkey and says, ‘If anyone says to you, Why are you doing this? just say this, the Lord needs it and will send it back here immediately.’
Implicitly in Mark 11:1-11 and explicitely in Matthew 21:4-5, the symbolism makes use of Zechariah 9:9-10, which speaks of a king of peace on a donkey who will banish the war horse and the battle bow from the land.
The contrast is clear: Jesus versus Pilate, the non-violence of the kingdom of God versus the violence of empire. Two arrivals, two entrances, two processions — and our Christian Lent is about repentance for being in the wrong one and preparation to abandon it for its alternative.” (”Collision Course,” Marcus Borg and John Dominic Crossan, “The Christian Century,” March 20, 2007)
Posted by SUSAN RUSSELL at 1:36 PM

Yes, we do not want to be in the wrong Palm Sunday Procession, even though some may say we are. However, when you are on God's side and do what Jesus would want, remember we live in America, where we live with inequities, prejudices of many types ("don't ask don't tell"), injustices, unequal pay for women, people who are willing to kill others because they choose to find work illegally (MAN'S LAW). Let us enjoy our Holy Week, remembering the walk (journey of Jesus), Let us breath in the Holy Spirit, Let us breath out any hate or anger. Let us remember the Anglicans, and the +Rowan, "we shall overcome someday"....Peace my sisters and brothers. Let us Keep next week Holy inspite of others who have hate in their hearts........

Susan: Thank you for the background. Often in church we hear how the gospel/readings apply to our life today. It's really refreshing when I get the background (East,West, Pilate, Jesus etc...).

Just as a side note. I went to the memorial service for Sue. I was a wonderful tribute with many friends and family.

Who walks WITH us in our journey now? Quoting the two processions,Anne Bonneyman, the new Rector of Trinity Church Copley Square preached on this same theme Palm Sunday. What struck me in the readings was the mention of the Women who walked with Jesus. Whether it was the women who walked with Jesus all that week, who poured oil on his feet crying, or the women waiting at the Tomb.

We walk this journey with many who have no access to blogs, no access to housing, to paid health care, women who struggle to escape violence at home or in their home country, and who will never be invited to the teaparties at Lambeth.

This week, I am reflecting on slowness, on patience and courage in that waiting at the foot of the cross. Trinity Church is finding its new way, with a rector who participated in the annual census of the homeless in our city.

Wishing you a prayerfilled moment full of rest this holy week Susan, and in Eastertide as well.
--peace, from Boston, Sara