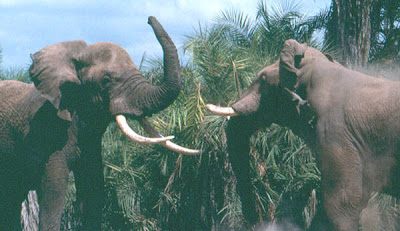 It occurs to me that this is deja vu all over again. History is repeating itself. We are in the midst of the Pelagian Controversy -- the Celtic Catholic monk who had a high doctrine of human nature and the fiery North African Bishop who saw the world through the lens of 'original sin'.
.
Except, this time, the North Americans in general and LGBT people are being used as the wedge between the two countries.
.
The old African saying is: When two elephants fight, it is the grass that suffers.
.
We are the grass here, folks.
.
We need to let these two elephants duke it out someplace else, so we can get on with the work of being the Body of Christ in the world -- however and wherever it is we see Jesus.
Posted by SUSAN RUSSELL at 12:45 PM

Cue the choir: It's a small world after all. (Just two veses, please. Any more and I may need to do murder).

I needed the chuckle. I had just taken off my asbestos boots, having wandered over there and read what the nasty people at "Viagra Central" (SFiF) were saying about me because I had the AUDACITY to posted the PRESS RELEASE from Changing Attitudes, Nigeria.

You can always tell it's a slow news day: The nasty folks at SFiF send out the Bottom Feeders to troll for stuff and then they just knock themselves OUT with ad hominum attacks.

Cue the choir again: Send in the clowns. Don't bother, they're here.

Let me ask: If the Global South is Augustine then who are the Pelagians?

You heard it here first: On September 30th, when the deadline for the ultimatum comes and goes and we have not been kicked off the Anglican island, "Big Pete" will declare Abuja the new Canterbury and himself the new ABC.

so let me just get this clear.
You're saying that the big fight that's going on is Williams vs Akinola and TEC just happens to be caught in the middle?

so you honestly think this is all just about a powerplay between Akinola and Williams?

"Stand Firm in faith, love one another and do not be tempted
to do anything wrong because of our sufferings."
From the story of the death of the Holy Martyrs, Petpetua and
Felicity, of Carthage 7 March (203)

Just thought I would post this since its their day of rememberance...

So, if October 1 is the day the community shrinks from 38 to 27 provinces will the world end? According to the various blogs, a formal statement was in his supreme great holiness's briefcase with 11 signatures. If we assume he deigned to sign it himself, that means 11 provinces leaving.

There are some benefits here. The housing crises at Lambeth will be releaved. All the energy spent on trying to placate the bullies can be used on something worthwhile.

There will of course be issues: Bishops to depose, diocese to re-start, congregations to re-form, and broken relationships to mourn. But, we have been down this road before. AMIA and the rest of the holier than God crowd have taught us we can survive, and even proseper.

RE"
You can always tell it's a slow news day: The nasty folks at SFiF send out the Bottom Feeders to troll for stuff and then they just knock themselves OUT with ad hominum attacks."

I'm not sure either side looks that great from a distance. Rev. Kaeton, your posting seemed to be filled with as much charity as you accuse from those you disagree. Taken to an outside observer, I'm not sure they'd see much difference.

Powerplay between Rowan and Akinola? What part of that don't you understand?

No, it's not ONLY that, but it IS that, make no mistake.

Rowan knows that if TEC cowers to the demands of Nigeria, the CofE is up the creek without a paddle.

He's banking on the fact that TEC will do his dirty work for him.

Scurry on over to my blog www.telling-secrets.blogspot.com and see what I have posted about Pelagius and then perhaps you'll have a clearer picture.

I find this remarkable. TEC carries out actions which the Primates (including Griswold) agree will "tear the fabric of the Communion" and yet you suggest it's not TEC's fault at all - they just get caught in the middle!

That's a bit like WW2 Germany complaining that they were just part of a powerplay between Italy and Britain.

I came over here to see a photo of that Kaeton woman on an elephant and all you are giving us are elephants - no Kaeton woman anywhere. I want my money back you second rate carnival huckster!

Yours sincerely
Disappointed of England

Thank you, Madpriest, for this breath of sanity.

Kevin - have you actually BEEN to SFiF and seen what they've said about me?

If you had, you'd know that my statements are mild and restrainted in comparison.

I'm having a hard time believing that you are an "outsider."

But, you are right about one thing: I have forgotten what my grandmother always said, "Never get into a pissing contest with a skunk."

e ... and who can get to the Stand Firmites and at LEAST get them to spell your name right! (Diane) Keaton is pretty hot right now but "Kaeton" she's not!!! :)

RE: Kevin - have you actually BEEN to SFiF and seen what they've said about me?

Yes I have and I'm not seeing any room for anyone to complain. If I were in charge, which I'm not, I'd send everyone to their room till each one apologized, no diner until them.