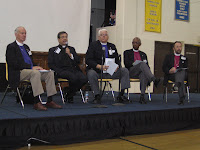 (+Bob Anderson, Canon Peterson, +Jon Bruno, +Chet Talton & Sergio Carranza)
The day-long gathering concluded with a "Q&A" opportunity with our own bishops about life in general and the recent House of Bishops' meeting at Camp Allen in specific. Here are some reflections on a few of their "A's" in answer to some of our "Q's": 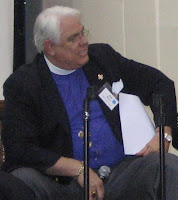 +Jon Bruno: Asked about "what nexts" for the Diocese of Los Angeles, Bishop Bruno made it abundantly clear that our commitment to the full inclusion of ALL the baptized in all orders of ministry is not going to change. He also noted publically how "blown away" by "The Chapman Memo" ... which as been around since 2003 but he just saw last week.
.
"All of a sudden I finally "get" why all that work and time and energy and money we've spent -- I'VE spent -- on trying to reach across to those on "the other side" hasn't worked," he said. "It hasn't worked because they didn't want it to -- their plan since at least 2003 and probably before has been to split this church."
.
Best quote? When asked about "what next" regarding the Archbishop of Canterbury, +Jon said, "It's time for him to stop acting like Chamberlain and start acting like Churchill."
.

+Chet Talton: Bishop Talton spoke at length about the shift in the "tone and timbre" of the meeting and with great appreciation for +Katharine's leadership. "She was able to bring the Communique and let the House of Bishops genuinely find its own voice in response to it" he said. "She sees her role to support the voice of the House -- not direct it." Concluding, "After many years in the House of Bishops I feel like I've finally seen how it ought to work."

+Sergio Carranza: Like the other bishops, Bishop Carranza had high praise for the Presiding Bishop and her leadership of the House. He was gratified by the strong support for a response to the demands of the Primates that makes it clear the Episcopal Church will not be blackmailed into marginalizing its gay and lesbian members. "It is time," he said, "not to be rude but to be honest." And he felt that the statements issued by the House of Bishops were significant steps forward in that regard.
.
When asked by a questioner how we can be (in the questioner's words) "inclusive of the intolerant" +Sergio said bluntly, "You can't. When you think you have the whole truth you cannot listen. And those who insist they have that whole truth are the ones who have walked apart by choosing not to listen."
.

+Bob Anderson: Finally, Bishop Anderson expressed some of the strongest feelings of the bunch. "Forces in the Global South are trying to push a Covenant through for the entire Anglican Communion in less time than any parish worth its salt would spend crafting a comprehensive mission statement," he said. He felt the Communion was being "railroaded" into accepting this Covenant and called efforts to have it crafted by June "ridiculous."
.
Like his brother bishops, he experienced the Camp Allen meeting as the least rancor-filled meeting of his career and noted the irony that the first meeting where +Katharine presided was held at a camp named for a Presiding Bishop who was unwaveringly opposed to the ordination of women.
.
+Bob also revisited the Chapman Memo issue, saying to the assembly, "I want you to go home and Google "Chapman Memo" and then print it out and put it alongside the Communique from Tanzania. You'll see the course of action charted out clear as day -- and you'll see where the responsibility rests for the divisions we face in this church today." And he applauded +Jon Bruno for hanging tough on the "property issues" that have been so contentious. "+Jon has taken a lot of flak on this one," +Bob said, "but we owe him a great debt of gratitude because this is not just about property it's about identity -- and the identity of this great church is worth fighting for."
.
His final and most energetic words were saved for +Peter Akinola: "As if what he's doing to the Anglican Communion isn't bad enough -- and it's pretty bad -- he's running around his own country pushing legislation that would prosecute and arrest people just for being gay or lesbian."
.
"Forget being Anglican," said Bishop Anderson. "That's behavior that isn't even Christian -- and someone needs to call him on it."
.
I think someone just did.
Thanks, +Bob!

Posted by SUSAN RUSSELL at 2:42 PM

With all due respect to our Bishop and with regard to his remarks about why his (our) outreach efforts haven't worked, all I can say is "better late than never".

I do not think that Camp Allen was named after PB John Allin (PB from 72-84, or thereabouts - certainly over the time of the first female priests) -- the names sound the same, but are spelled differently.

Hmmm, Hiram ... you make me question that one myself. I've heard it SAID it was named after the PB but admit to having trusted and neglected to verify.

From the Diocese of Texas website: It has been 85 years since Rosa Lum Allen gave her home in Galveston to the Diocese of Texas to hold the first summer camp in 1921. There are as many counselors today at Camp Allen’s home near Navasota as there were campers back then.

You have to love the irony in Bp Carranza's statement "When you think you have the whole truth you cannot listen. And those who insist they have that whole truth are the ones who have walked apart by choosing not to listen." That sums up the entire revisionist agenda for the last 50+ years of TEC's descent into heresy and eventual oblivion. It's pretty much obvious to anyone with a shred of respect for Biblical authority who has "walked apart".

It really IS time for clarity-- and for pride at following Christ's example of inclusivity. As a church body and as a diocese we can be proud of an orthodox faith with an "existential theology" that reflects a living relationship with God--Creator, Redeemer, and Sustainer-- who moves us to ever new understandings and applications of scripture. Certainly the Holy Spirit didn't retire and move to Nigeria. But I'm puzzled. I recently attended Mass at the Cathedral Center and heard the priest tell someone that our Bishop has ordered a moratorium on house blessings, and union blessings? Can you take back a blessing given? I can't imagine this to be the case. What IS the official policy now? Are gays and lesbians NOT marginalized UNLESS the individual priest so chooses? We should proudly write above the door of every Episcopal Church-- All are welcome and included equally. God clearly blesses our unions and our homes. Why does the church lag so far behind.